MUSIC AND YOU | Mindfulness and Music: How Making Music Can Help Reduce Stress

In today’s stressful world, stress-management resources are almost as common as the ailment they treat: from spas to anti-anxiety medications, just about everyone seems to be seeking relief from the high-pressure, always-on, need-it-now nature of modern society. Playing an instrument can also help reduce stress.

One of the leading treatments for stress, backed up by decades of research and centuries of practice, is mindfulness meditation, a practice developed within the Buddhist tradition and popularized in the Western world largely by Dr. Jon Kabat-Zinn, Professor of Medicine Emeritus at the University of Massachusetts Medical School and founder of the mindfulness-based stress reduction (MBSR) program.

Hundreds of studies, especially conducted in the last ten years, have demonstrated the effectiveness of MBSR as treatment for a variety of symptoms including stress and anxiety — so much so that MBSR is now offered (and occasionally, required) by various institutions including the U.S. military and McGill University’s Faculty of Medicine.

Music therapy is another important line of treatment, in which accredited professionals use music listening and music making to treat conditions ranging from developmental disabilities and acquired brain injuries to chronic pain and emotional difficulties. Many recent studies have shown that listening to music can reduce stress, as well as help us bounce back faster after a stressful situation.

While there’s hardly a shortage of studies on the use of music listening to reduce stress, as well as studies on the intellectual benefits of music training and musicianship, there has been a dearth of studies examining the relationship between music making and stress reduction — a connection that many amateur musicians will anecdotally attest to, as recorded by Lisa Tams, a social-emotional health and wellbeing expert in a 2013 article[1] from Michigan State University.

A new frontier in music therapy

Dr Teresa Lesiuk, a music therapist and associate professor at the University of Miami’s Frost School of Music, recently conducted a study designed to examine the efficacy of a mindfulness-based music therapy, including both mindful music listening and music making, to treat mood symptoms experienced by women receiving chemotherapy for breast cancer. In a 2016 article[2] published by Lesiuk about the study, she concluded, “MBMT enhances attention and mood, particularly the mood state of fatigue, in women with breast cancer receiving adjuvant chemotherapy.”

“It is possible that it [MBMT] has been used in some form by music therapists who were influenced by Kabat-Zinn’s mindfulness from the early ‘90s, but there is little writing or research about it,” says Dr. Lesiuk in an e-mail interview.

“However, there has recently been a huge interest in it and now I see an increasing number of mindfulness and music sessions at music therapy conferences and in clinical settings.” 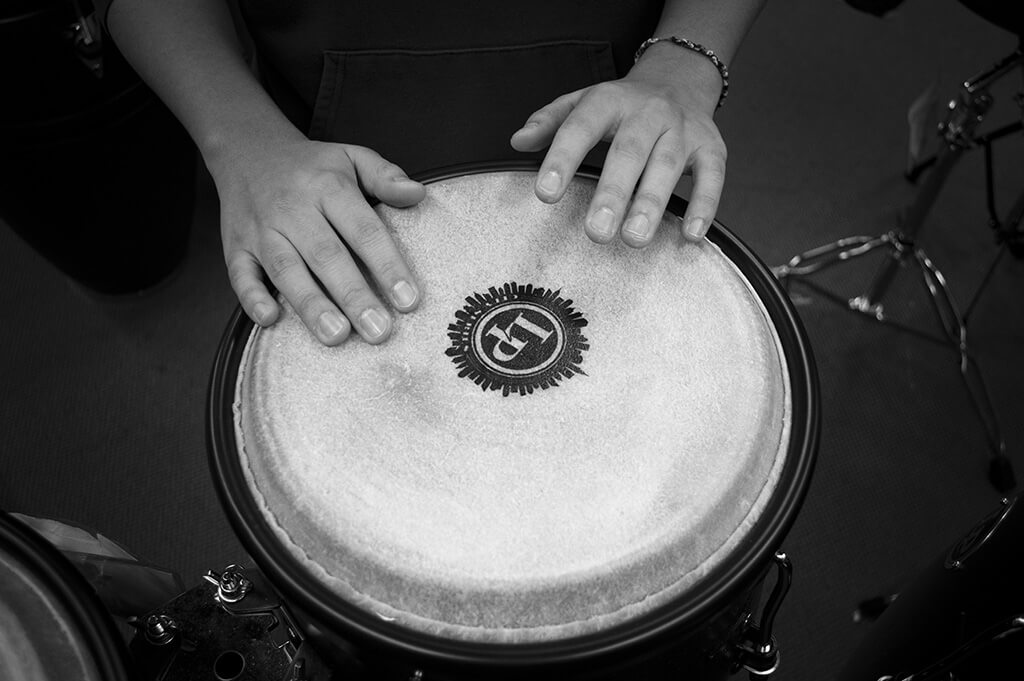 According to Dr Lesiuk’s article, « Music activities varied each week and were comprised of focused music listening and writing, exploring new instruments, singing, imitating rhythms and playing instruments in an ensemble, and music-assisted relaxation. » In the MBMT program developed by Dr Lesiuk, four attitudes drawn from Dr Kabat-Zinn’s MBSR program were cultivated through music making and listening:

“The first attitude, called non-judging, refers to the absence of evaluating and/or reacting in a habitual way to stimuli. […]

The second attitude, called beginner’s mind, is the practice of perceiving newness in one’s environment, even when the environment is very familiar. It is a positive attitude in which one is willing to practice a sense of wonder and leave old practiced ways of perceiving, especially negative ones.

The third attitude, called suspending judgment, while similar to the first attitude, emphasizes the willingness to try out new experiences and suspend one’s critical voice. This attitude was smoothly implemented in the MBMT program when the women were challenged to be open to trying new music experiences. The fourth attitude, called acceptance and letting go, is a mental practice of viewing one’s experience without fighting or striving to change one’s current state.”

Exercises to cultivate these attitudes included exposing participants to novel musical instruments and asking them to produce sounds, which they would contemplate with an attitude of “beginner’s mind”. Another exercise included producing rhythms and rhythmic music:

« The session consisted of imitating and creating simple rhythms on a large paddle drum, playing simple harmonic changes on a xylophone, playing a bordun (a repeated pattern) on a piano keyboard, and playing a familiar melody by number on the keyboard. » The latter two exercises were in fact developed as part of a 2012 study on the use of music therapy to treat substance dependence.

« These music experiences served as a practice trial of the attitude to suspend judgment of self, especially when trying something new. »

By cultivating these attitudes as part of musical engagement, the participants were able to transfer these skills to daily life, as evidenced, in part, by the anecdotal reports included in Dr Lesiuk’s article.

“I am aware, as I am a pianist, of the layers of engagement involved with music making (memory, motor movement, listening, emotion, creativity),” says Dr Lesiuk.  “My knowledge as a researcher of how what is required in music making may help those with cognition, motor, and emotional challenges.”

Playing an instrument can help reduce stress even without a formal meditative focus. When she took up the cello, Dr Manon Giroux, head of a surgical department at Pierre-Le Gardeur Hospital in Terrebonne, found that between reading music and doing different things with each hand, her focus was consumed with the present.

« All my attention was directed towards that moment,” she says. “I joked that I couldn’t even chew gum at the same time! » Her practice was, nevertheless, regimented: when she began, she practiced every day, no matter how long, before slowing her pace to 3 to 5 days a week.

« Now I play when I need a break, when I’m stressed, and sports don’t work, or simply when I feel like being alone. When I’m angry or sad, it’s also a way of taking refuge within my bubble and letting emotions out. I thought that to be able to express emotions by playing an instrument, you had to be a good musician. However, I realized that even if at the beginning it’s more noise than music, I still came to feel better by playing and negative emotions were eliminated afterwards. »

Existing research on music and mood

Much of Dr Lesiuk’s previous research has focused on how music can produce positive affect, i.e. the experience of positive emotions such as happiness or engagement, and how this can improve the work performance of people in high-stress occupations. “I think the link from music listening to improved productivity is fascinating. There is much evidence that feeling mildly content improves our creative thinking ability – and certainly music, when it is chosen by the individual, can bring about feeling content.”

Other research, including some by McGill neuroscientist and professor emeritus Dr Daniel J. Levintin, supports these findings, linking the physiological changes in the body brought about by music making to psychological changes. In Neural Correlates of Musical Behaviours: A Brief Overview,[3] Dr Levintin cites a 2012 article suggesting that music making regulates breathing and heart rate.

“PTSD and stress, which are known to affect these automatic systems, can perhaps be alleviated through breathing, singing, and playing wind instruments,” writes Levintin.

While research on the positive emotional effects of playing an instrument has increased significantly in the past 15 years, there is still a lot of work to be done in this field.

“Empowering people to learn about when they might use music as a resource for productivity should be researched, implemented, and tested to benefit both the individual and the organization,” says Dr Lesiuk. “More work needs to happen here.”

Dr Giroux’s advice for prospective musicians? Start with reasonable goals, play for yourself, and express yourself no matter how basic your musicianship. “Believe in the effects of music, even if it is primitive, and let yourself be carried away by the music.” 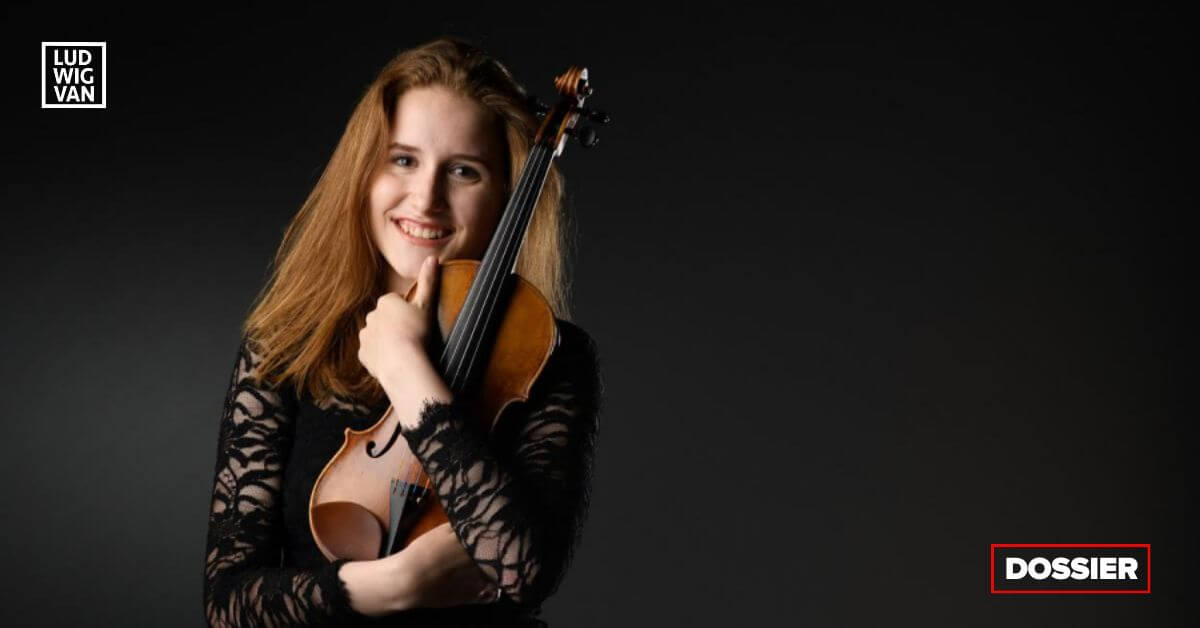