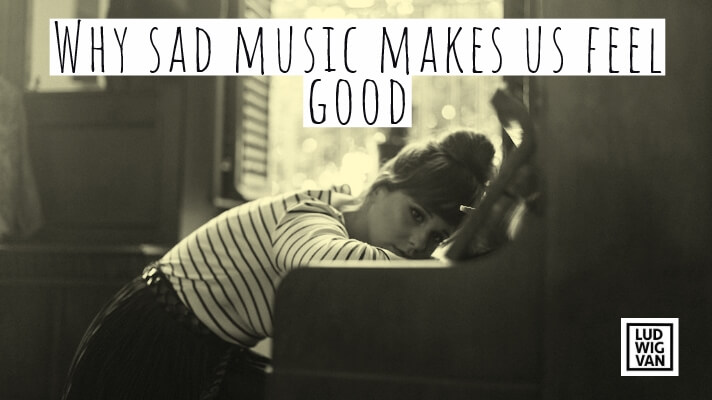 As a teenager, whenever I was feeling particularly angsty, I would shut myself in my bedroom, draw the curtains, and put on my “sad music” mixtape. A quick survey of friends and popular culture suggests that this is a common way for teenagers and indeed people of all ages to ride out emotions of sorrow, misery, and melancholy, whether their playlist features Barber’s Adagio for Strings or Adele’s latest pop ballad.

But why are we so drawn to sad music when we are feeling sad? Wouldn’t it be better to listen to happy music to cheer ourselves up? For that matter, why would we be interested in listening to sad music at all?

“The likely reasons could be boiled down to two main aspects: empathy, and feelings of being moved,” says Dr. Jonna K. Vuoskoski, a professor of music cognition at the University of Oslo. “Many listeners feel a sense of human connection when listening to sad music, and resonate with the signs of human emotional expression that they hear in the music. In other words, sometimes we respond to sad music as we would to the observed experiences of another human, and the more we are moved by it, the more we enjoy it.”

So even though we try to avoid circumstances that might make us sad, the experience of merely feeling sad can be an enjoyable one – a fact illustrated by the popularity of tragic operas, films, and TV dramas. But what about when we’re already sad and in need of consolation?

“When we are feeling sad, we often seek the company of an empathic friend. Music can sometimes act as an surrogate of such a friend, providing consolation and solace. When you are listening to music that expresses or encapsulates how you are feeling at that moment [it] makes you feel that there is someone who understands how you feel.” – Dr. Jonna K. Vuoskoski

In his bestselling book The World in Six Songs, McGill neuroscientist and musician Dr. Daniel J. Levitin names “songs of comfort” one of the six types of songs. His assessment of the importance of sad music agrees with Vuoskoki, explaining that happy music, contrary to consoling a sad person, can make that person feel even less understood and actually increase distress.

But there are deeper mechanisms at work. A large-scale 2013 literature review led by Levitin and fellow McGill researcher Dr. Mona Lisa Chanda found a range of physiological effects that can be caused by music listening, including the treatment of both physical and psychological pain.

Levitin’s 2013 paper “Neural Correlates of Musical Behaviours: A Brief Overview” points out that music has been used “to distract patients from the horrors of surgery” and is still used by doctors today for a variety of reasons, including pain management.

Levitin explains that the brain produces a cocktail of hormones in response to music, including dopamine, serotonin, and opioids: chemicals that relieve pain and produce a sense of euphoria and include drugs such as morphine and heroin. A 1980 study demonstrated the role of the brain’s own opioids in musical enjoyment by showing that naloxone, typically used to reverse drug overdoses by blocking the effects of opioids, minimizes the thrill of music.

Anyone who has ever made a “relaxing” mix tape or playlist won’t be surprised to learn that the connection between music and stress relief has also been demonstrated by science. In the same paper, Levitin draws on studies from 2008 and 2009 to discuss how slow tempos and low pitches, both common features of sad music, can slow a listener’s heart rate and breathing, and even decrease blood pressure, body temperature, muscle tension, and levels of cortisol, the stress hormone – all leading to an increased feeling of calm.

The comforting effect of sad music and prolactin

One interesting explanation for the comforting effect of sad music could be the hormone prolactin, says Dr. David Huron, a professor at the Ohio State University’s School of Music and Center for Cognitive and Brain Sciences. Our prolactin levels increase when we feel upset or stressed, and this produces a consoling effect.

Tears of sadness, for example, contain high levels of prolactin, while the tears you produce while chopping an onion are prolactin-free. In a 2011 paper titled “Why is sad music pleasurable? A possible role for prolactin” Huron likens listening to sad music to “a good cry” in that deliberately increasing feelings of sadness through musical choice can increase prolactin levels, and by extension feelings of consolation.

Why, exactly, does music produce these physical effects?

“There is still much research to be done in this area in order to understand the underlying mechanisms,” says Vuoskoski, “but the physiological reactions caused by music listening are likely related to emotional contagion (‘catching’ the emotional expression we hear in music outside awareness), and/or the internal simulation of the movement properties and physical energy we hear in music.”

In other words, scientists think that the brain responds to both the emotional aspects of music as well as the physical ones, such as rhythm, essentially by imitating them.
Studies suggest that most of us enjoy listening to sad music, while only a small minority say they hate it.

This hunger for sadness has baffled philosophers since Aristotle, but science is now discovering the mechanisms behind why sadness, and especially sad music, can be pleasurable. Of course, you don’t need to be a scientist to know that music is medicine – any angsty teenager can tell you about the comforting effect of sad music.