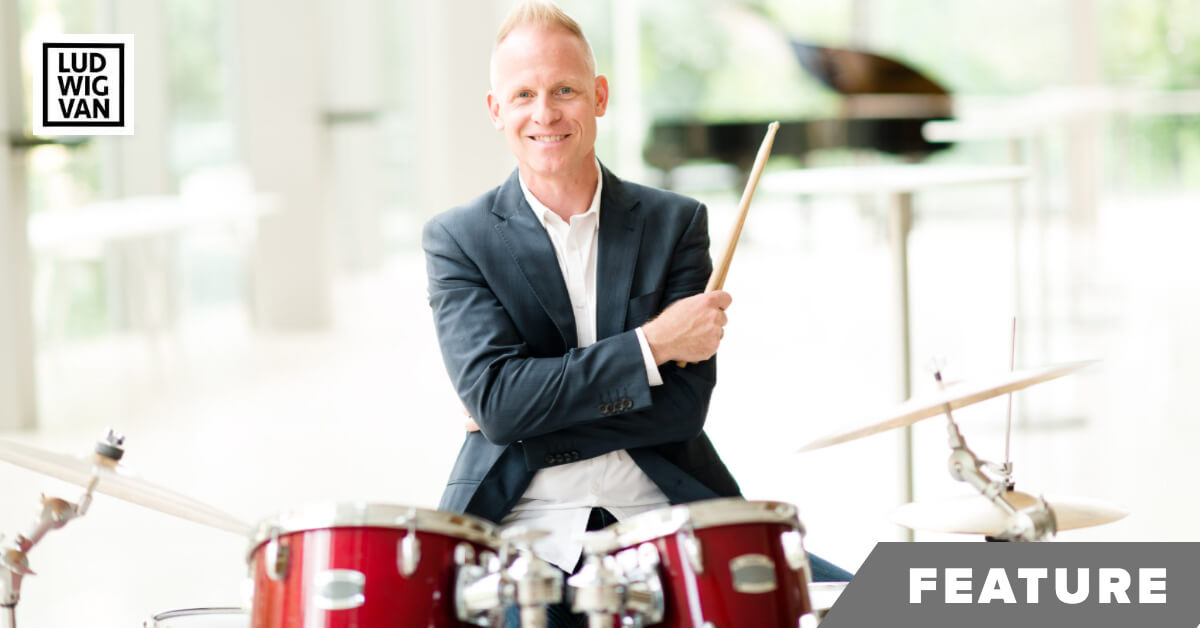 At this year’s Royal Conservatory Wide Open House Ludwig Van’s Robin Roger puts her learning to the test by signing up for demo classes in instruments she doesn’t play.

You’ve probably noticed that life seems to go sideways for a lot of folks in those years between 40 and 60.  The so-called mid-life crisis, fodder for entertainment and literature, is portrayed as an inevitability, as real as adolescence or the terrible twos.  But social science has pretty well proven this to be false, and replaced the myth of the mid-life crisis with the fact of a mid-life slump.

As dispiriting as this prolonged mid-life malaise may be, it wreaks far less destruction than a crisis, and after it gradually dissipates, life starts to turn around.  Social science has virtually verified the existence of a U curve of human development that produces an upturn in life around the end of middle age.  This appears to occur in most cultures and countries, and even seems to be the case for our fellow primates, Orangutans and Chimpanzees.  This may present a paradox:  when our bodies sag our spirits lift.

With increased longevity, this late phase of the life cycle can be a long one.  So we should make the most of it by doing everything we can to maximize our health and well being as much as possible for as long as possible.  One critical component of that is continuing to learn new things.

Learning something new is emphatically not the same thing as becoming more advanced in a field you already know.  If bridge is your game, moving up the ranks is definitely worthwhile, but it’s not the same as starting a new project in a different learning domain.  Graduating from conventional crossword puzzles to cryptic crosswords would no doubt pose a challenge, but still won’t deliver the benefit of starting from zero on a different brain task.  Learning something completely new forces you to pay very close attention in a different way, because there is no embedded knowledge on which to draw.  It delivers brain benefits you can only get through such intense focus.

As few adults play more than one musical instrument, if that, learning to play a new instrument is a great option.  I know that many adults think that learning to play an instrument has to begin in childhood but this is only true if the goal is professional performance.  As my snail-paced progress at piano proves, with practice it’s possible to learn.  My attitude is that it’s the ongoing sense of continuously learning a little bit more that is gratifying, rather than achieving a particular level of virtuosity.

At this year’s Royal Conservatory Wide Open House I put this attitude to the test by signing up for demo classes in instruments I don’t play:  cello, Carnatic violin, flute and percussion.  In each case, I found it really difficult to impossible to produce a decent sound but found it gratifying nonetheless, because I was so intrigued by all the minute nuances I was being taught by the Conservatory faculty.  For example, the truly encouraging cello instructor, Tova Rosenberg, couldn’t get me to make the fingers of my bow hand “clingy” enough to properly maneuver the bow.  Even so, she managed to lead me through a short rhythmic phrase on each of the strings, while tactfully guiding my bow hand with her hand so that it didn’t hit two strings at the same time.  Rosenberg also encouraged me to beat the cello with my knuckles, using a wide-circled, King-Kong like gesture that felt delightfully playful.

When Subhadra Vijaykumar told me to take off my shoes in order to try playing the Carnatic violin, I was taken by surprise, briefly wondering if I was going to be using my toes.  It turned out that this South Indian approach to the western violin entails sitting cross-legged on the ground, resting the scroll of the violin in the crook of the ankle and leaning the body of the instrument against your torso.  In this position, the arm moves the bow across the strings with the elbow held away from the body.  Trying to balance the violin, keep my elbow away from my body, look down at the strings without crossing my eyes, and pull the bow across a single string without letting it drop on an adjacent string, while feeling painfully stiff hips, proved to be more than I could manage.  Subhadra also had to hold my hand and arm and move it for me to give me any sense of a decent sound.

Every instrument I tried made me aware of the centrality of a different body part or system that would no doubt be improved by practicing properly.  The cello requires a strong core to support the instrument, the Carnatic violin demands limber hips, which Westerners lose from chair sitting.  After I managed to blow enough air across the flute embouchure hole to produce a sustained audible note, Dianne Aitken told me that it takes more air to play flute than tuba.  Making the sound required organizing my jaw and tongue muscles, taking a full breath, and releasing the air evenly.  It took Aitken several patient tries to coach each student in the group.  After one student produced a long, resonant note with her first try Aitken correctly guessed that she’d been a swimmer.

My day ended with a bang — pun intended — when percussionist Ed Reifel spent 15 minutes teaching me to play the Djembe, a West African drum.  After demonstrating how to strike the skin with the heel and the palm of the hand, Reifel taught me a couple of rhythms and then had me play them back to him in a variety of patterns, culminating in a call-and-response sequence that demanded careful listening on my part to detect the signal that triggered the reply I was supposed send back.  I went from feeling mildly self-conscious to deeply absorbed and slightly elated and reminded me of how powerfully social playing music can be.

Group musical performance, instrumental or vocal, is another great pursuit for adults on the upswing of the U curve.

In part two of this series, I’ll describe another program for adult music learners, The Toronto Summer Music Festival.

For further information on group classes and private lessons at the RCM consult their website: rcmusic.ca

For part two of this article, see here.