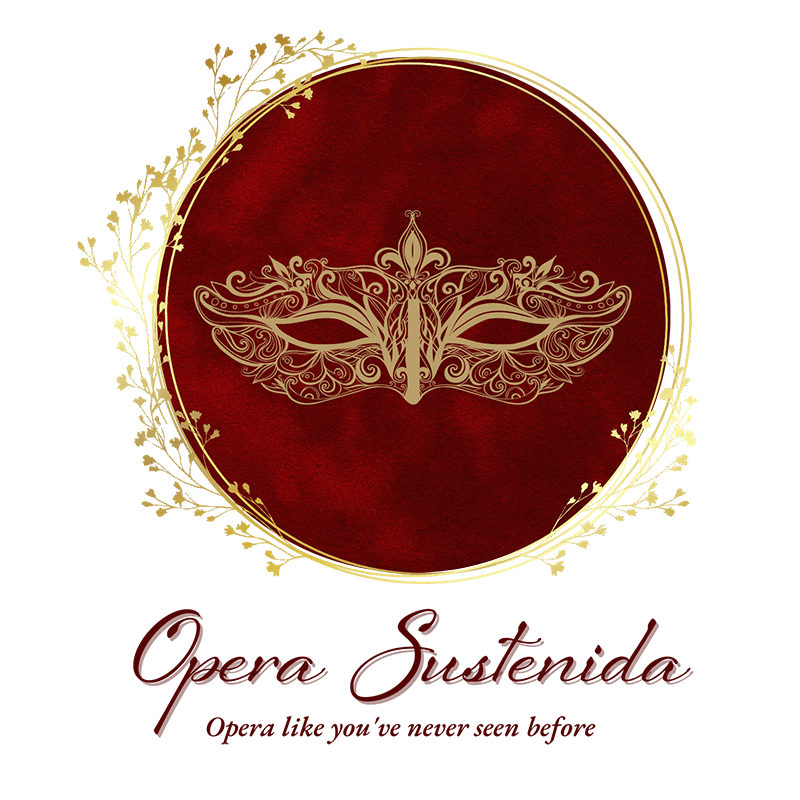 Opera Sustenida is a new, woman-led, independent opera company based in Toronto that brings opera to modern audiences through their innovative use of virtual techniques and contemporary retellings of beloved stories. The ensemble features the combined talents of Canadian musicians Stephanie DeCiantis (dramatic soprano/Stage Director), Nicole Whitney Dubinsky (coloratura soprano/Social Media Liaison), Daniella Theresia (mezzo-soprano/Administrator), and Suzanne Yeo (pianist/Music Director). Since 2020, “The Divas” have prided themselves on creating visually stunning and musically engaging virtual concerts that combine pre-recorded performances with live chat components. Their most recent series of virtual concerts celebrated arias, ensembles, and choruses from the Baroque, Classical, and Romantic eras, receiving over 1200 ticketed views from around the world. In September 2022, The Divas will present their first full, live opera production, melding the old with the new in a traditional setting of Verdi’s opera Il trovatore with modern sensibilities.

Stephanie DeCiantis is a ‘…top Canadian voice’ (Opera Canada) gaining attention for her “powerful” sound (Jake Evans, the Intelligencer) and “lush musical ebb and flow”(Opera Canada). Recent performances include at the Meermusik festival in Dusseldorf, Germany, Donna Elvira in Brott Opera’s virtual production of Don Giovanni, the Overseer in Powerhouse Opera’s Elektra, and the Soprano Soloist in Shostakovich’s Symphony No. 14 with the Kindred Spirits Orchestra. Ms. DeCiantis was recently a semi-finalist for the Vincerò World Singing Competition, and was previously a winner and laureate of the Jeunes Ambassadeurs Lyriques with Thèâtre Lyrichorégra 20 and a semi-finalist for both the Elizabeth Connell prize for Dramatic Sopranos and the Francisco Araiza Sonora International Opera Competition. Performance highlights include Nedda from Leoncavallo’s Pagliacci (Southern Ontario Lyric Opera), Senta from Wagner’s Der Fliegende Höllander (Opera by Request) and Leonora from Verdi’s Il trovatore (Opera Sustenida). In addition to performing the principal roles of Leonora and Rosalinde, Ms. DeCiantis will also serve as Stage Director for Opera Sustenida’s upcoming productions of Il trovatore and Die Fledermaus, respectively.

Nicole Whitney Dubinsky has been praised for her “warm, engaging soprano voice and excellent, nuanced dramatic presentation” (Weill Music Institute). This summer, Ms. Dubinsky was a featured soloist with the Burlington Symphony Orchestra in their “Afternoon at the Opera.” She also performed as a part of the ‘MeerMuzik’ festival in Düsseldorf. This year, Ms. Dubinsky recorded and premiered as Mirella in The Lion Heart, a new original opera written by Corey Arnold and Kyle MacDonald. Ms. Dubinsky was thrilled to sing Lucy in Toronto City Opera’s video broadcast of Menotti’s The Telelephone (2019-2021 season). Other notable performances have included a concert appearance with the Paskke String Quartet and the unique triple role of Olympia/Giulietta/Antonia in Toronto City Opera’s production of Les contes d’Hoffman. Ms. Dubinsky has sung the Queen of the Night with Opera York, Premiere Productions Ottawa, the Accademia Europea dell’Opera in Amsterdam, and in Opera Laurier’s 100th Anniversary Production. She serves as the company’s Social Media Liaison and will perform the role of Adele in Opera Sustenida’s upcoming performance of Die fledermaus.

Daniella Theresia brings her love of languages and passion for unexplored repertoire to her audiences through her work as a soloist, opera singer, and professional ensemble lead. Since completing her B.A. in 2009, she has sought excellent vocal training through opera programs and private study in North America, Europe, and Israel. Ms. Theresia moved to Canada in 2017 and has since performed with a variety of musical organisations, including Toronto Masque Theatre, Toronto City Opera, Opera by Request, Opera for All, Toronto Oratory Choir (Holy Family Catholic Church), and the Etobicoke Centennial Choir. Outside of her work for Opera Sustenida, Daniella nurtures a fondness for art song and has released two solo albums – Alma Mahler in the Mediterranean (2015) and The Eternal Feminine (2018). Her concert series The Eternal Feminine explores women’s lives, dreams, and creativity through their words and music, and was most recently performed at Toronto’s esteemed Beth Tikvah Synagogue, with a feature on Jewish female composers. Ms. Theresia also co-hosts The Art Song Podcast with Suzanne Yeo. In addition to her administrative duties for Opera Sustenida, Ms. Theresia will perform the role of Inez in their upcoming production of Il trovatore and Prince Orlovsky in their 2023 production of Die fledermaus.

Conductor, pianist and vocal coach Suzanne Yeo has performed in North America, Europe and Asia, to much praise for the intensity and sensitivity of her interpretations. After a stint as a doctoral candidate in the German department at Princeton University, she returned to music and obtained her M.Mus. in piano performance from the University of Toronto. Her long-standing affinity for opera and Lieder led her to the sphere of collaborative piano, and in 2020 she co-founded Opera Sustenida, an opera collective noted for its wittily modern takes on the standard repertoire. She has also been active as a conductor since her public conducting début at Jan Harrington’s choral/orchestral conducting masterclass at the Princeton Festival. Most recently, as assistant conductor in two Toronto City Opera productions (Nabucco and Cavalleria Rusticana), she conducted one performance of each opera, and, as one of Orchestra Toronto’s Apprentice Conductors for 2022, she led a performance of de Falla’s Ritual Fire Dance in their “Carmen!” concert. Ms. Yeo will serve as Music Director and conductor for Opera Sustenida’s production of Il trovatore and Die fledermaus.