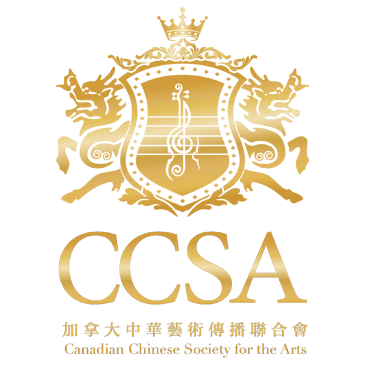 The Canadian Chinese Society for the Arts (CCSA) is an artist-led music organization founded by Angel Wang, a Chinese-born Canadian violinist.  It is dedicated to the performance of Western and Chinese classical music on a variety of traditional and modern instruments with the intent to foster a deeper appreciation of both cultures in Toronto and the broader Canadian society through both live and digital performances.

The CCSA orchestra has performed live to sold-out theatres in both Toronto and Beijing where it was invited by the Ministry of Culture of the People’s Republic of China to perform in the prestigious “Meet in Beijing” International Arts Festival.  It was a significant event as it was the first time a Canadian orchestra had been invited by the government of China to perform in this festival.

A series of digital concerts by the CCSA string ensemble were produced during the pandemic. A second series will be added in 2022/23.

Committed to the performance and promotion of works by Canadian composers, the CCSA has commissioned a new work for orchestra and solo violin by the celebrated composer Alice Ping Ye Ho. The work will be premiered in late 2023.

Renowned violinist Angel Wang has established herself as a violinist of exceptional ability in both China and Canada in solo, chamber, and orchestral settings. Her most recent passion has been the founding of the Chinese Canadian Society for the Arts (CCSA), a charitable organization that promotes and performs traditional Western and Chinese music live in concert and also on digital platforms. Angel is the President and Artistic Director.

To date Angel Wang has sold out several performances with orchestra and guest artists at George Weston Recital Hall, North York “From Hollywood to Beijing to Vienna,” 2017; Koerner Hall, Toronto, “From Bach to Beijing to Broadway”, 2018; and the Beijing Concert Hall in China, “Meet in Beijing”, 2019.

In addition to her diverse and busy performing activities, Angel Wang is much in demand as a teacher. She is a faculty member at the Royal Conservatory of Music of Toronto where she leads a full violin studio. Angel is also a guest professor of Wulanchabu conservatory in China, and the music professor and art consultant of C9 Art Toronto. Her students are frequent recipients of awards and are distinguished players. Many are now pursuing careers in music.

As a soloist Angel has performed on television and has appeared as a judge for numerous television competitions and festivals, most recently The Kiwanis Festival in Toronto. Angel Wang has performed in the Toronto production of the hit musical “The Sound of Music” and was the concertmaster for a production of “La Traviata.”  She was a featured guest artist with The Burlington Symphony.