Inspired by watching broadcasts of the Boston Pops Orchestra as a youngster in his native Colombia, Bastidas founded the OPO in 2014 to foster musicianship in a positive, inclusive and supportive environment. One of the most diverse professional orchestras in Canada, the Toronto-based orchestra performs classical and popular music, provides musicians with performance and professional development opportunities, and highlights the work of women and BIPOC composers and instrumentalists.

Contact ClassicalCommunications@gmail.com to request a physical CD or digital copy of this recording. 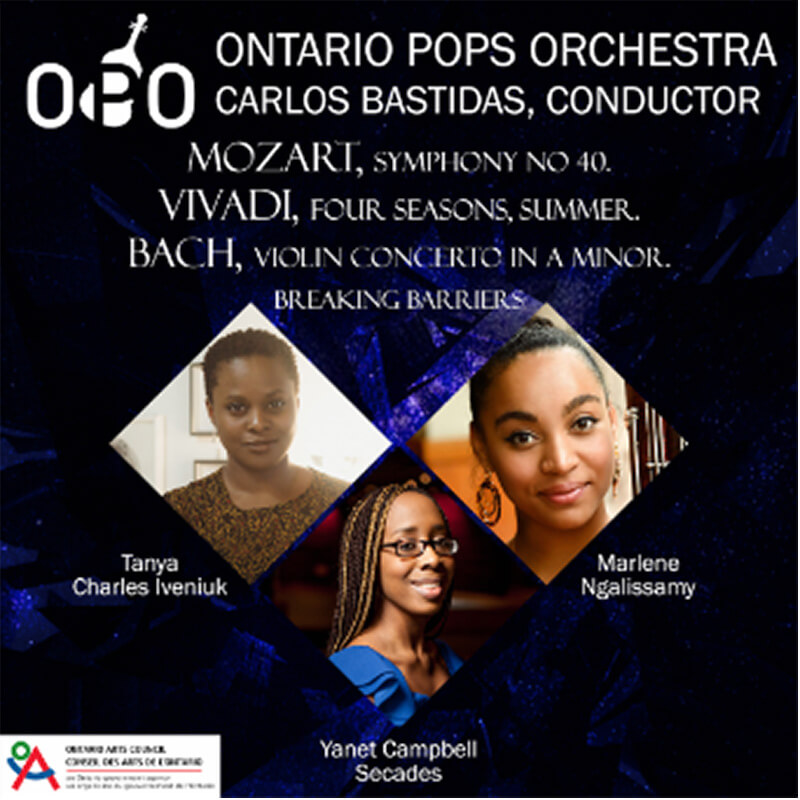 Violin Concerto in A minor, No. 1, BWV 1041 by Johann Sebastian Bach

Carlos Bastidas is the founder, conductor, and music director of the Ontario Pops Orchestra in Toronto and the emeritus conductor for the Durham Chamber Orchestra in the Region of Durham (Ontario). Born in Colombia, Maestro Bastidas studied bassoon, composition, conducting and chamber music at the University of Ottawa. In 2019, he received the Transformation Institute’s Transformation Award for Heritage, and was one of TD’s 10 Most Influential Hispanic Canadians. As found of Ontario Pops, he has steadily built the ensemble’s following and developed its reputation as one of the most diverse professional orchestras in Canada from its beginnings in 2014.

Born in Camagüey, Cuba, violinist Yanet Campbell Secades is an accomplished soloist, chamber and orchestral musician. She has performed throughout Europe and the Caribbean as well as in her home country Cuba. In 2015, she won the first prize at Cuba’s prestigious Unión de Artistas y Escritores Cubanos (UNEAC) competition, and in 2019 she was a prize winner at the Federation of Canadian Music Festivals’ National Competition. Yanet has performed at the Rheingau Musik Festival in Germany and the Mozartwoche in Austria. She received her Master of Music from Memorial University of Newfoundland and she is currently is in the Artist Diploma Program at the Glenn Gould School of the Royal Conservatory of Music in Toronto.

A native of Hamilton, Ontario, Canada with roots in Saint Vincent and the Grenadines, violinist Tanya Charles Iveniuk, has performed across North and South America, and the Caribbean. Recipient of the Women’s Art Associate of Canada – Luella McCleary Award, the Gabriella Dory Prize in Music, and the Hamilton Black History Council’s John C Holland Award, Tanya received a Bachelor of Music from the University of Toronto, and an Artist Diploma from the Glenn Gould School. She is the concertmaster of the Obiora Ensemble, and violinist with Ensemble du Monde (Guadeloupe), Toronto Mozart Players, and the Odin Quartet. Former posts include Associate Concertmaster of the Gateways Festival Orchestra and violinist with Sinfonia Toronto. Tanya is a dedicated educator, and an in-demand string adjudicator and clinician abroad as well as in Ontario.

Marlene Ngalissamy developed a deep passion for the bassoon at age 13. As her curiosity blossomed, she was accepted at the Montreal Conservatory of Music where she studied with Mathieu Harel and Stephane Levesque. She continued her studies at the Curtis Institute of Music with Daniel Matsukawa. She participated in workshops and programs around the world, including the Pacific Music Festival in Japan, the International Summer Academy of the University of Music and Performing Arts Vienna and the Pablo Casals Festival in France.