Op-Ed | Stacie Dunlop: 'How can we create a group project in isolation?'

I posted this quote on Facebook during a 20-week self-directed creation residency in 2012/13 at The Banff Centre for the Arts:

“Musicians are some of the most driven, courageous people on the face of the earth. They deal with more day-to-day rejection in one year than most people do in a lifetime […] With every passing year, many of them watch as the other people their age achieve the predictable milestones of normal life — the car, the family, the house, the nest egg. Why? Because musicians are willing to give their entire lives to a moment — to that melody, that lyric, that chord, or that interpretation that will stir the audience’s soul. […] In that instant, they were as close to magic, God, and perfection as anyone could ever be. And in their own hearts, they know that to dedicate oneself to that moment is worth a thousand lifetimes.” — David Ackert, LA Times.

This ideology can easily resonate with every performing artist across their varied artistic disciplines, especially now. I have just spent the last two weeks intensively in collaboration with two fierce artists on a project that was supposed to have taken place in March and April of this year, but was postponed due to the complete shutdown of the world due to the COVID-19 pandemic.

The Lonely Child Project had its first workshop phase in March 2019, and on February 3, 2020, we continued into the second stage of its development. The work was scheduled to continue again in mid-March, with rehearsals culminating in a live showing of our work at the end of April, which would have had performers along with a small test audience of guests in the venue. But, as we all know, that never happened due to COVID-19 and the lockdown that began on that ill-fated Friday, March 13. Nor could we figure a way for it to happen, or if it will ever happen. 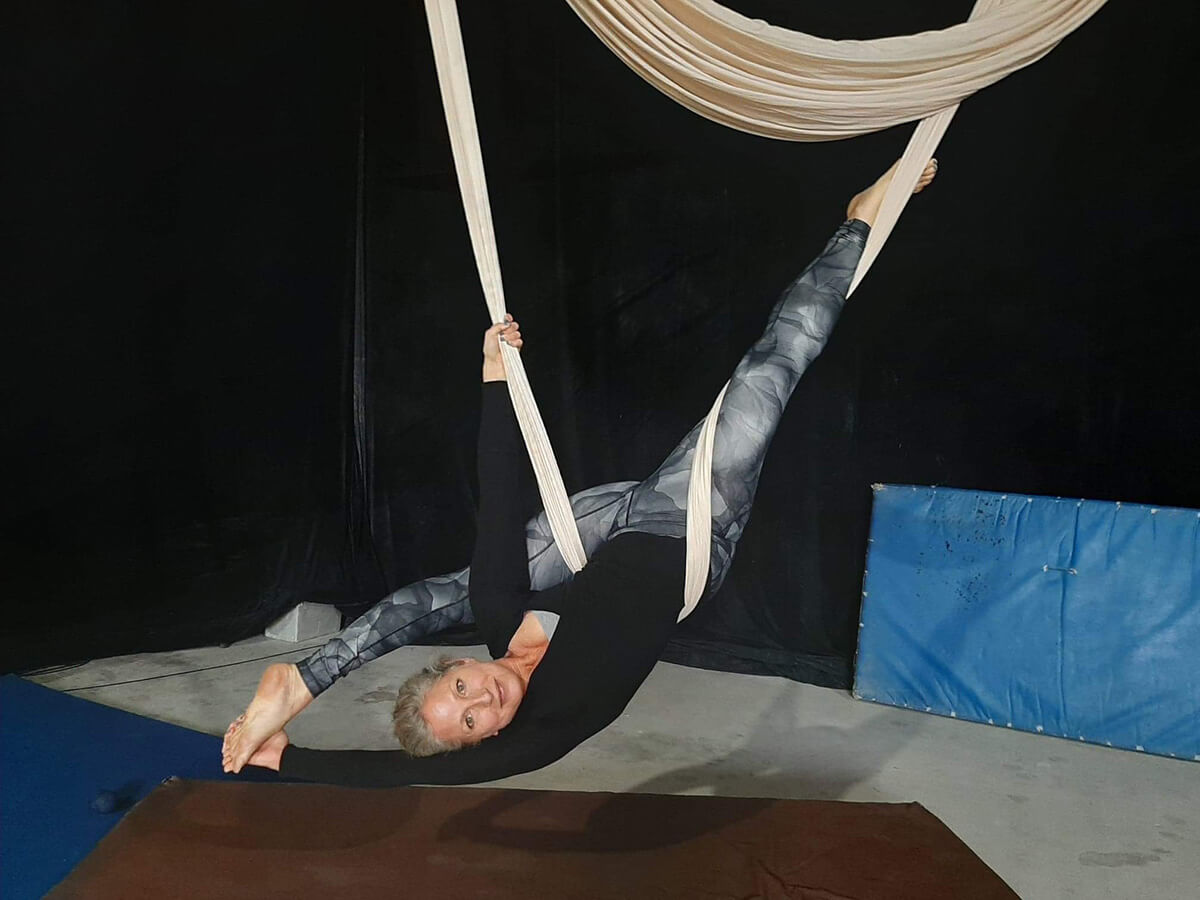 The month of March was a dark time. Yet, creative beings seemed determined during our isolation to make music: from singing on balconies with accompaniment from a pianist on another floor to bagpipes played through a window alongside a cheering crowd in support of health care workers. It seemed as if the creative juices of the entire artistic community around me could not be silenced by a mere virus. And yet, all I wanted to do was to curl up in a ball and practice yoga — and so that is what I did, for an entire month.

Then on April 15, the Canadian Stage Company had an online zoom and drinks party with the dance and circus community, so I decided to be “social” for the first time since March. Then I’m not sure what happened. Something sparked in me from that meeting of creatives who seemed lost and hurting, and maybe even afraid. I woke up the next day and began to write down my thoughts:

“How can we create a group project in isolation? How can the theme of loneliness be informed and heightened by our experience of isolation during the pandemic? Can we capture each instrument separately and then line them up digitally to produce a recording so that each musician can record safely in isolation? Is this possible? Can we perform at a distance, three performers on stage, but never touching? Isolation, loneliness, distancing with intention.” 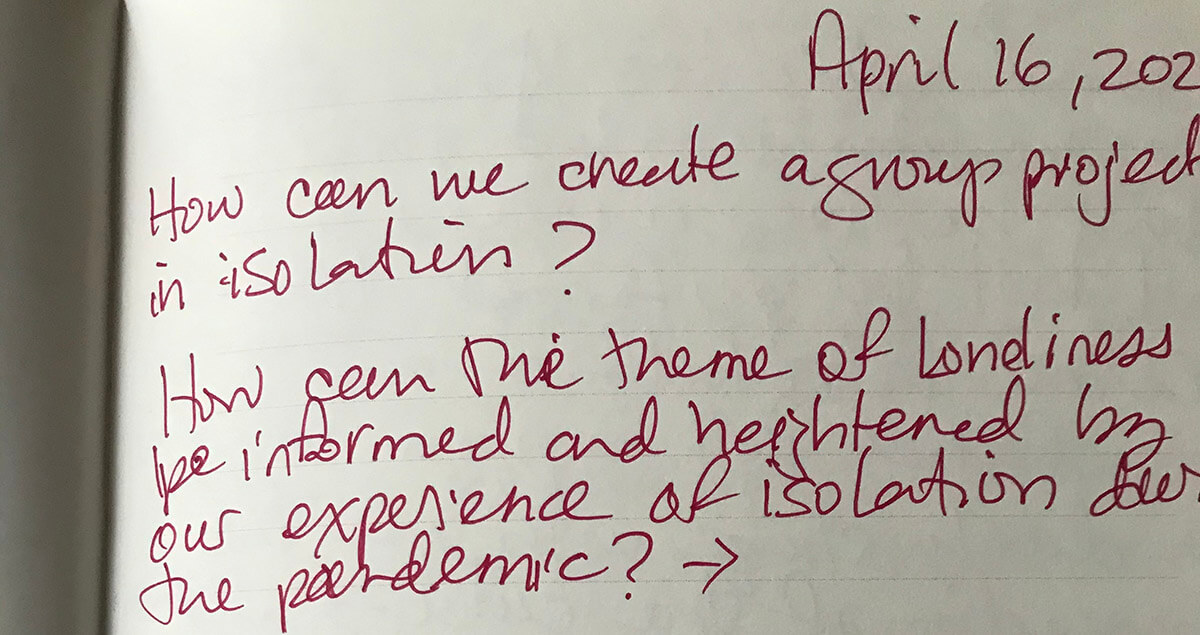 I was all fired up, in full creative mode again, out of the shock that I had been living in, and the inwards place of self-reflection that I had been gently steeping in was broken open. I bounced into action and began scheming, overflowing with ideas and effervescent energy. I couldn’t wait to spring my thoughts onto my collaborating partners.  But these ideas were not embraced by my colleagues who had transitioned from performing artists into full-time moms and school teachers, so going FORWARD into a digitized direction was difficult to envision, as they just wanted everything to go BACK to “normal”. I put on my yogini and producer’s hat and looked at the situation from the place of the observer. Rather than reacting, I stepped back from the foreground and gave space to those who needed it and began to plan.

I applied for funding from the Canada Council for the Arts for their newly created digital grant created in response to COVID-19, and drew up a rough timeline. It was time to make decisions about going forward. I approached my partners to set a plan in motion. It would begin in late September with the isolation recording sessions and culminate in mid-October with two intensive residency weekends in Welland, Ontario. The work would be captured by video, to be shared later with friends, family and colleagues, rather than for a live audience.

But before that work would happen, I would be travelling to France from September 6–20 to complete the sixth session of my training in the Advanced Pedagogic Group that I had begun in March 2017. This final workshop was initially scheduled for April 2020 and was rescheduled due to COVID-19. As there were no direct flights to Montpellier, it would mean that I had to travel through Charles de Gaulle airport. It was quite an unsettling experience — especially when they herded an entire planeload of people from who knows how many international countries packed in like sardines onto a small terminal-to-terminal transport shuttle. Once at the venue, I would be working in close proximity with an intimate group of artists from France, Sweden, Denmark, and Italy. 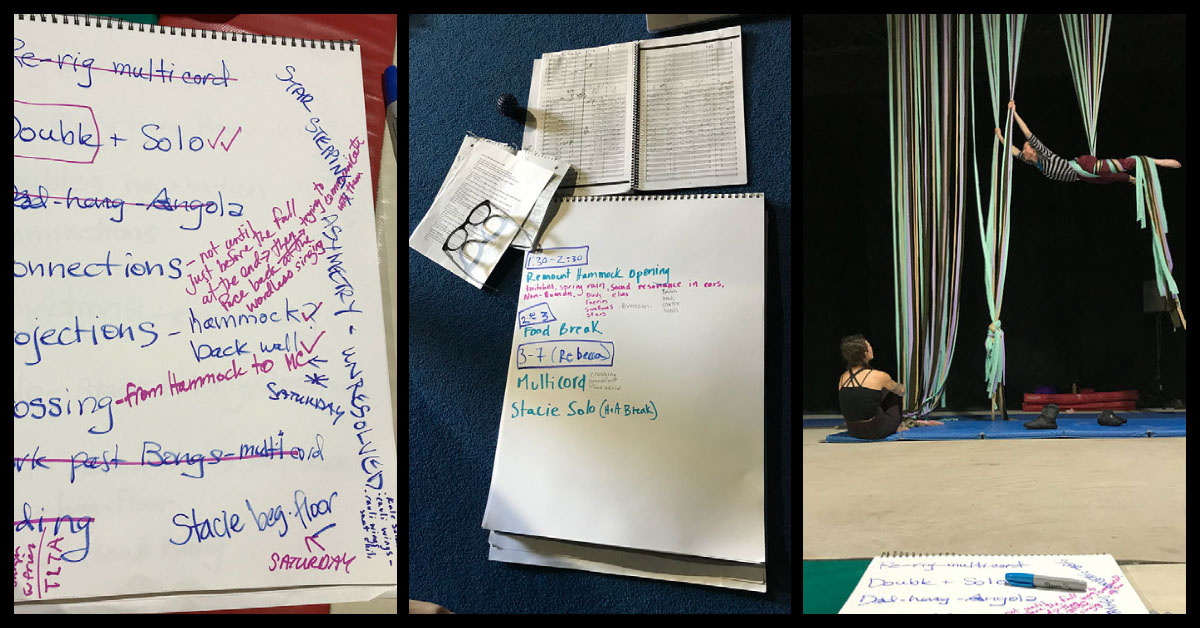 The workshop’s theme was finding new ways to listen, and using social distancing techniques to apply to our work, which, pre-COVID-19, was extremely hands-on/physical theatre. To say that the workshop was transformational would be an understatement. I don’t know if the previous months in isolation gave me a different perspective on the work, but it was profoundly moving to be working and creating as an artist again after those many months of stagnancy.

I left France two weeks later, with daily cases of COVID-19 in excess of 13,000 and climbing, into a 14-day quarantine back home in Canada, where I would begin work on the Lonely Child Stage 2 Isolation Recording. The project was scheduled to begin virtually on September 23 at Big Smoke Audio, a private recording studio run by Dennis Patterson. 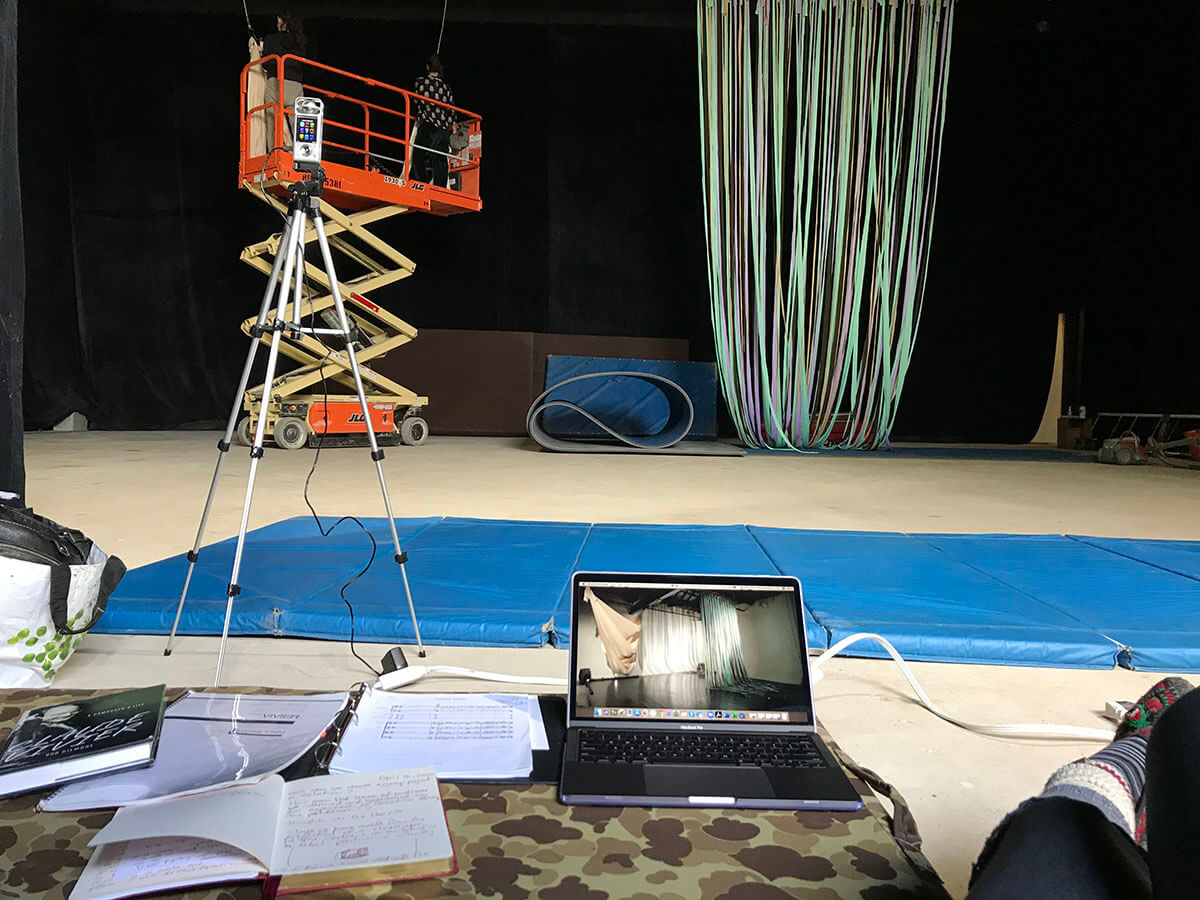 I say “scheduled to begin” because although we did start recording on September 23, a phone call came from Dennis 15 minutes before we were scheduled to begin the second session, to tell me that his COVID app had gone off at that he was closing down his studio until he received a negative result from testing. I then rescheduled to the following week. But on Sunday morning, the double-bass player contacted me to say that his COVID app had gone off, so his session had to be rescheduled for Wednesday. And then, as if things weren’t already hairy enough, on the Wednesday, the violist contacted me to say that her child was sick with a fever and runny nose. I took off my producers’ hat and started to cry.

I had three sessions scheduled for that day, and was at the end of my rope. I took a breath and got into the place of the observer once again, told the violist to take care of her son, and got on the phone to the double-bass player, who lived in London Ontario, to ask if he could jump in the car and make it to Toronto for the session originally scheduled for viola.  I made another call to a violist to see if she could make the evening session. She said that she could only play the session on the weekend, so I rescheduled the sessions for the third (and final) time. We completed the recordings on the morning of October 5 with my session to lay down the voice track, (producer hat off and performer hat on). The mix was created to use for the physical workshops scheduled to begin the next week.

On October 10, the Ontario government announced stage 2 closures which included our venue. This meant moving the project to a different venue in Welland from Toronto. In any other time, this might not be a big deal, but in COVID-19 times, this involved writing a protocol for our work in the space, adding travel and accommodation to our already very slim budget, and making sure we had a babysitter for the duration of the workshop who would feel comfortable living in a bubble with all of us over the two weekend periods.

Then finally, at 12 pm on October 17, there we were, on the floor of a fantastic studio space, listening with our eyes closed to an incredible recording created in isolation by 7 brilliant musicians, an extraordinary recording engineer and a wonderfully imaginative and courageous music director/arranger/composer. And it was perfect, and it filled us up. We breathed it in, fully, with our bodies and souls. We took a fearless leap forward into the work with our hearts and minds open. Creatively engaged in the process of continuing to grow this beautifully sublime work in the time of COVID-19.

Stacie Dunlop is a professional singer based in Toronto, Ontario.