Glenn Gould is one of Toronto’s most famous classical musicians and left his mark in many places around the city. This is what they’re like today. 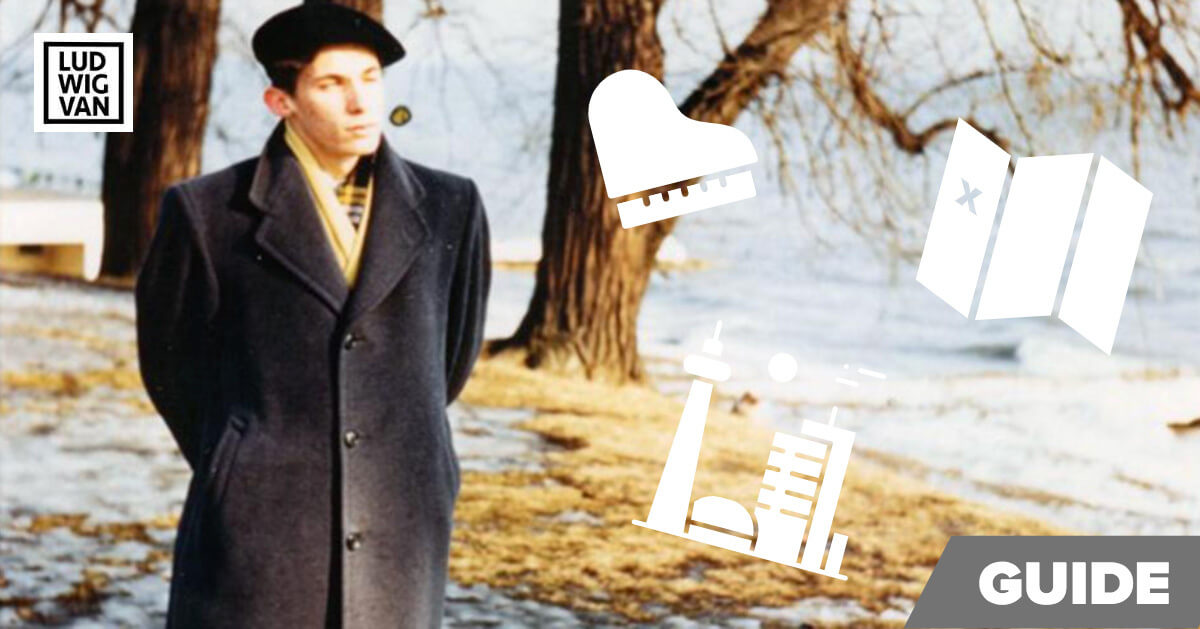 A few weeks ago I visited the Glenn Gould Studio at the CBC Building where the iconic Glenn Gould Park Bench statue is located. Sitting on the bench with the statue, I got curious about all of the other Glenn Gould-related places in Toronto. So many places are connected to him in some way that the Glenn Gould Foundation has actually put together a guide!

It seemed like an interesting adventure to visit some of the significant places in his life, and a good way to force myself out of the house on a frigid January day. (Glenn Gould famously preferred warm temperatures, so I’m not sure what he would have thought of my quest).

I planned an itinerary starting at the St. Lawrence Centre, walking up to Fran’s on College, to the Glenn Gould Park and his old Apartment, and ending at his childhood home in the beaches. The route seemed to make logical sense – and when I mapped it out on Google maps, it kind of looked like a grand piano. I bundled up and, with his 1955 recording of the Goldberg Variations tinkling in my headphones, headed out on my adventure. 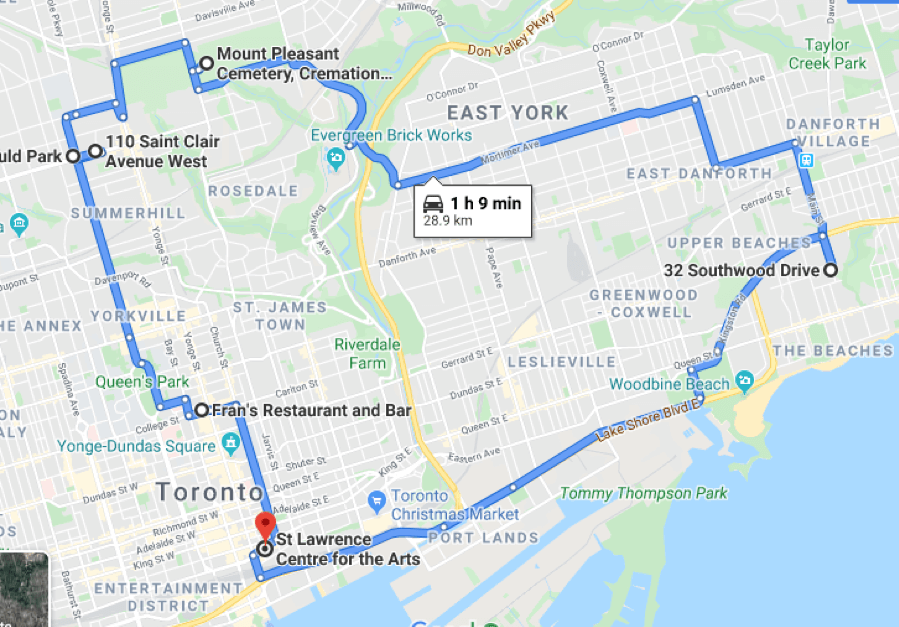 Glenn Gould’s recording studio of choice was the Eaton Auditorium at College and Yonge St, but after it closed, he made some recordings at the St. Lawrence Hall on King Street.

One source I looked at before starting my trek incorrectly said that he recorded at the St. Lawrence Centre on Front Street (which struck me as a little odd, but I ran with it). The St. Lawrence Centre, where Glenn Gould didn’t record, is pretty unexciting from the outside, except that it’s across from Berczky Park. While the park is new and Glenn Gould never would have seen it, when I visited I had the feeling that he would have enjoyed it and its now-famous dog fountain. He was known as a dog lover and left much of his estate to the Toronto Humane society.

So, Glenn Gould didn’t record at the St. Lawrence Centre. However, having walked past the St. Lawrence Hall (where he did record) almost every day, I can tell you that it’s a very nice historic building. To be honest, I didn’t know there was a space inside it for recordings as it has storefronts at street level. It’s also across from a nice park that has lots of dog visitors. As with most concert halls, I can only assume that the real magic comes from the music that gets made inside.

The other disappointment with learning that Glenn Gould didn’t record at the St. Lawrence Centre is that is throws a wrench into my observation that a Fran’s restaurant is located next to most of the places he frequented, since Fran’s on Front is practically across the street.

Fran’s on College is the one he visited the most – often enough that he is now depicted in a mural in the back corner. It is across the street from the former site of the Eaton Auditorium where he liked to record. For me, it was also a great pit stop for a good eggs benny brunch, even though Glenn Gould preferred scrambled eggs in the wee hours of the morning. The mural is still there, but fair warning: it’s a little awkward to take pictures of it when people are sitting in front of it trying to enjoy their home fries.

A bus ride up to St. Clair and Avenue Rd brought me to Glenn Gould Park, which features a play structure and a statue of Peter Pan. The park is across the street from where the Toronto Music Library used to be, but since that has moved the park itself if otherwise very similar to most other small city parks, and isn’t really connected to Glenn Gould.

Visiting his old apartment building really got me thinking about the legacy we leave behind. Does the person living in the penthouse now even know that it used to be his? I wonder if the neighbourhood could hear him practising if he ever had the windows open. Would they have recognized it as coming from one of the greatest pianists of the 20th century?

The Glenn Gould Foundation guide says that he furnished the apartment with modest furniture from Goodwill and kept stacks of materials for his private archives. It’s a simple but elegant building, and not open to the public.

At this point, I had planned to visit his grave at Mount Pleasant Cemetery, but having just been confronted with the thought that no one will really ever care where I used to live, I didn’t want to face my own mortality too (plus, it was really cold). The cemetery is quite beautiful though, especially in the summer.

While it wasn’t on my original itinerary, I decided to take a detour to see how the Massey Hall construction is going. Glenn Gould made his orchestral debut there at the age of 13 in 1946 with the TSO. Right now, it’s still covered up, so the only interesting thing to note is that Fran’s is across the street from this hall too!

The brick house where he grew up is nestled in a quiet residential area in the beaches. It looks like most of the other houses on the block, except that it has a historical plaque in front. The house itself is very cute, and I can definitely imagine the sounds of him practising wafting out the windows on a hot summer day. While I spent a fair amount of time taking pictures of his apartment and wondering what it was like to live there, it felt much creepier to stand outside of someone’s house taking pictures. At least in this instance the residents definitely know it used to be Glenn Gould’s house.

The house is a fair bit outside of the downtown core, so you’re probably better to visit on a warm day when you can also enjoy the lively stretch of Queen Street nearby and the rest of what the beaches have to offer.

Latest posts by Michela Comparey (see all)
Share this article