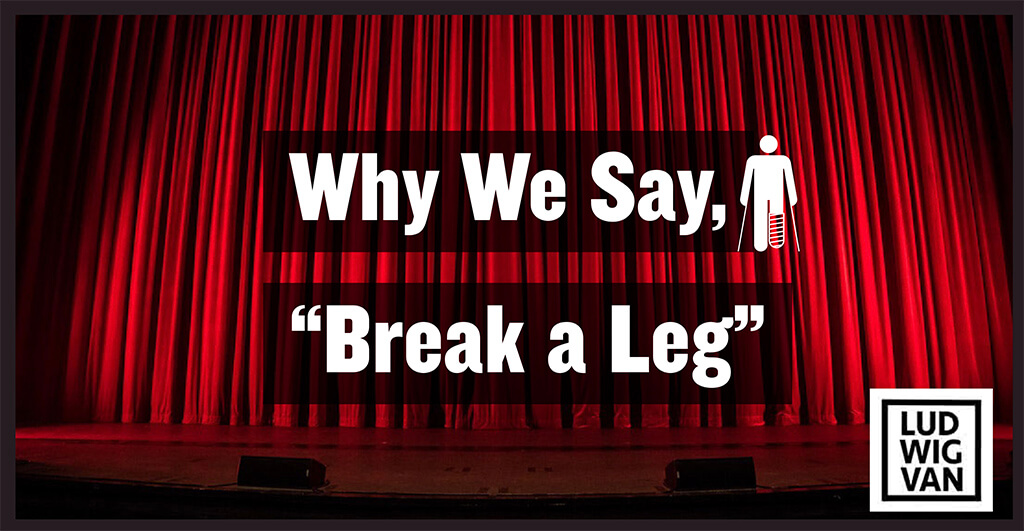 Have you ever wondered why people say “Break a leg” to performers before a performance? While the origins of the phrase are murky, there are a number of theories on how this curious practice got started.

The first mention of “Break a leg” was recorded in print by Robert Wilson Lynd in 1921. An urbane literary essayist, he wrote an article, “A Defence of Superstition,” about the prevalence of superstition in the theatre and horse racing. He outlined that in horse racing, one would never wish someone good luck as it might push one’s luck too far. You would say, rather,  “I hope your horse will break a leg.” This served as a kind of reverse psychological thought to appease the spirits of fate, which favoured the humble. He also mentioned that though Theatre was not as superstitious as horse racing, it was close.

In 1939, the phrase again turned up in an autobiography by Edna Ferber, titled “A Peculiar Treasure”. She recounts tales of understudies sitting backstage hoping for principals to break their legs.

Nearly a decade later author Bernard Sobel wrote in his book, The Theatre Handbook and Digest of Play, that performance actors never wished each other good luck, and instead said, “I hope you break a leg“.

The use of the phrase has also been attributed to an old Yiddish phrase (הצלחה און ברכה) (“success and blessing“). It was later adapted in German as “Hans un beinbruch” or “Hals- und Beinbruch“, which translates as “breaking your neck and legs”. It was used by both English and German pilots in WWII as a way to wish pilots a good flight.

“Break a leg”  may also allude to the practice of bowing or curtsying by performers during a curtain call. By placing the feet in front of each other and bending the knees, it breaks the line of the legs, hence the phrase, “break a leg”.

One more possible origin comes from a legendary performance of Shakespeare’s “Richard III”, starring 18th-century British actor, David Garrick. The actor fractured his leg on stage and was so involved in the role, didn’t even notice he had broken it.

In North America, Vaudeville has laid claim to “break a leg”, but in this case, it refers to the crossing of the legs of curtains found on traditional Renaissance stages.  Companies would often overbook performers, and only those lucky enough to be chosen would ultimately be paid. They would wish each other luck by saying “break a leg”, meaning, “I hope you get paid“.

Interestingly, “Break a Leg” has evolved beyond the stage world, and now includes the variants such as “give me a break“, “getting a break”, and “breaking into the business”.

Ballet dancers also have a version to “break a leg” which is, shall we say, a little more “colourful”. Dancers blurt out “Merde!” before going out on stage as a way of disarming pre-performance jitters.

In Spanish, the phrase goes a step further with, “mucha mierda”, or “lots of excrement”.

The opera-world prefers to use say, “Toi toi toi ” as the good luck charm of choice.  It sometimes includes the practice of knocking on wood, or spitting on the floor. The phrase roughly translates to “devil, devil, devil” — Teufel, pr. toi-fell) in German, and comes from “No’ kommt mer in’s Teu-Teu-Teufelskuchen bey ihm. Now we come into the De-De-Devil’s Kitchen!  It may also be related to the practice of spitting three times to ward off bad luck.

Break a leg vs. Good luck

To wish a performer “good luck”, is ironically considered bad luck. It can also be construed as being somewhat pessimistic, by indirectly implying the performer may not be competent enough to succeed with luck. “Good luck with that”.

Psychologists have long been critical of the belief of external factors relating to performance. The risk of such beliefs is that it encourages performers to view events relying on competence and skill as outside of their control. Phycologists argue idioms may be tied into a performer’s sense of self-efficacy. In other words, expectations about the future are relative to past outcomes, rather than competency.