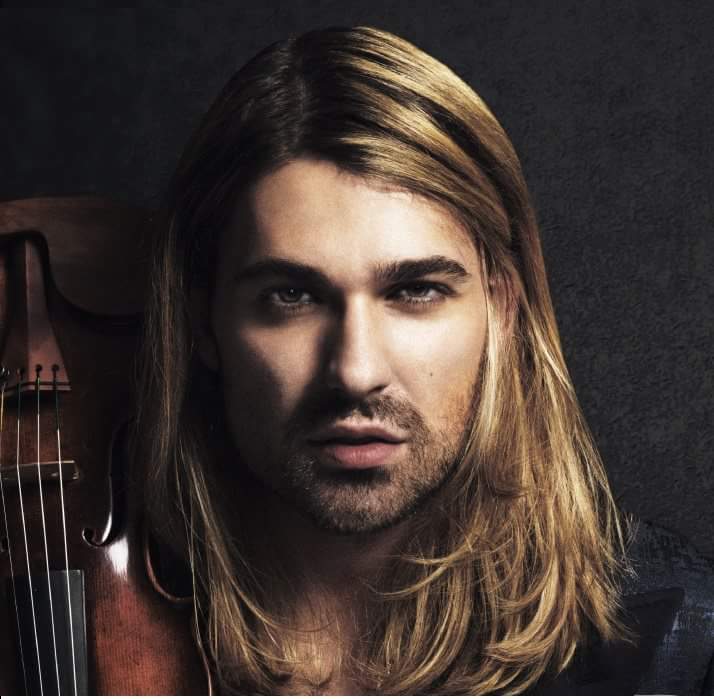 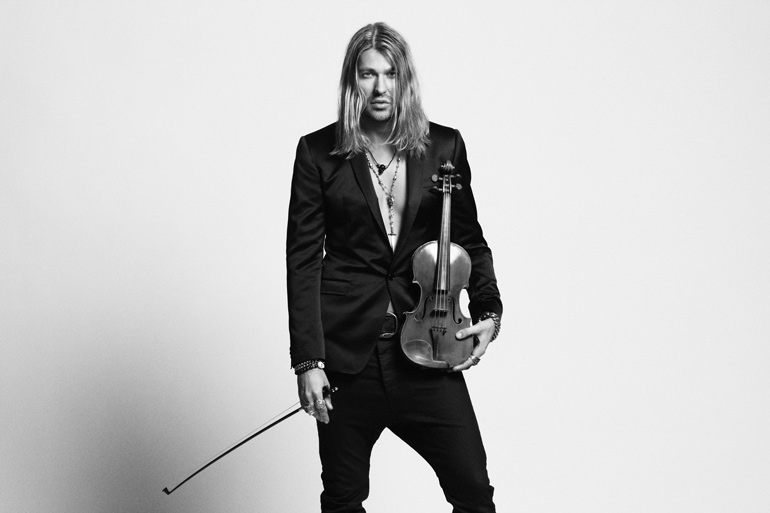 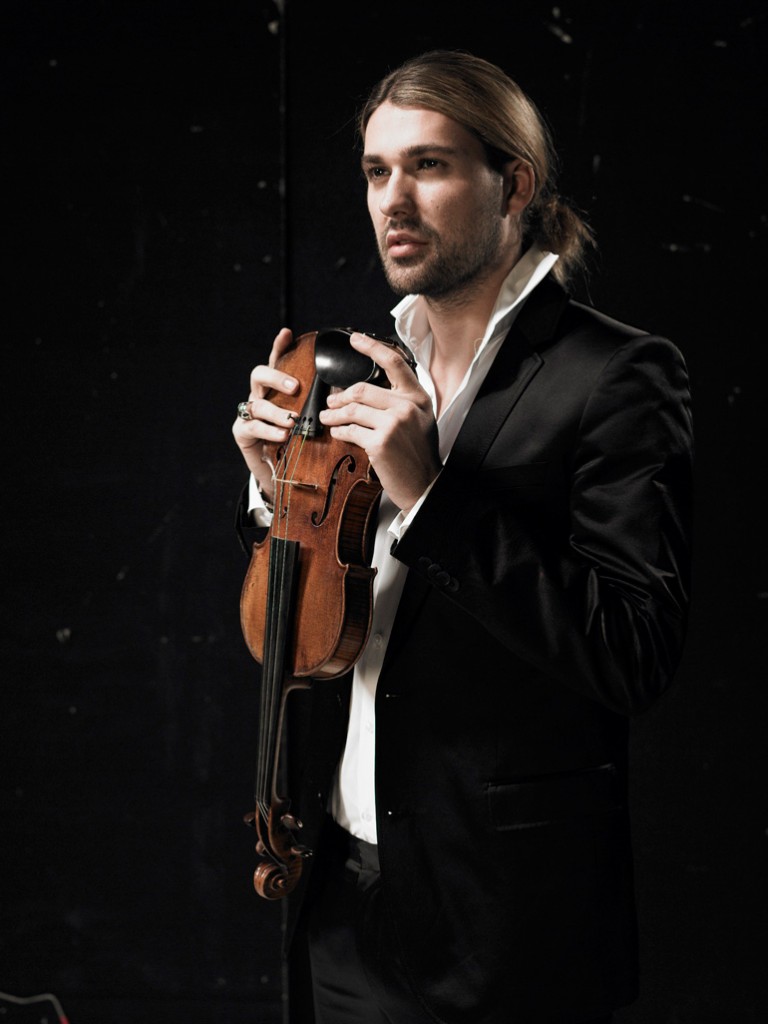 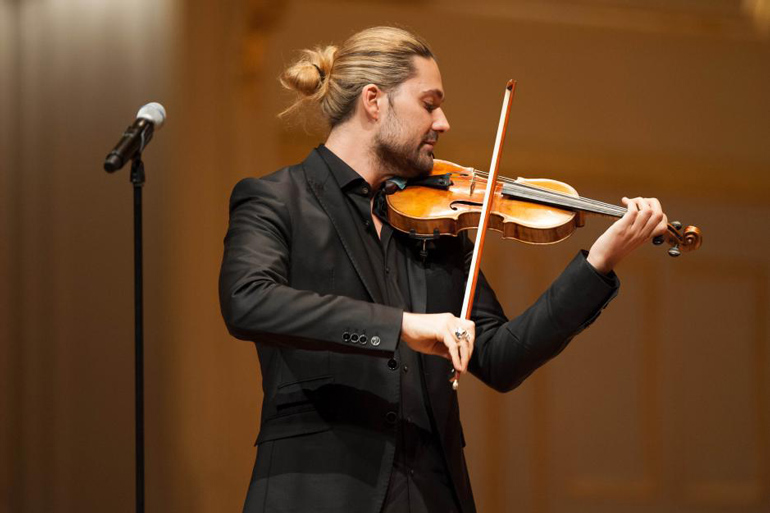 The native of Aachen, son of a German jurist and an American prima ballerina, can allow himself to sound out the limits.

He gets his first violin at age four and makes his first appearance with the Hamburg Philharmonics at the early age of ten. At age thirteen he is the youngest artist to be awarded an exclusive contract with the Deutsche Grammophon Gesellschaft. In 1999, at the height of his career, the shooting star redirects his energy, deciding to leave his predetermined path as a classical violinist and move to New York – not to take a time-out but rather to place his musical proficiency on a theoretical foundation and perfect his technique. He enrolls at the prestigious Julliard School, studying musicology and composition.

Instruction with Itzhak Perlman lends his performance completely new facets. David Garrett’s particular enthusiasm for studying composition earns him a distinction in 2003 when he wins the renowned Composition Competition of Julliard School with a fugue composed in the style of Johann Sebastian Bach. In doing so, he lays the foundation for what have become legendary arrangements. His highly esteemed American composition teacher Eric Ewazen has said of him “As a violinist, his spectacular, heartfelt and expressive playing already dazzled – even when he was a student – those of us who had the great pleasure of teaching him, and we recognized his extraordinary gifts and his amazing talent.”

Since completing his studies, the visionary violinist has committed himself to a clearly defined goal – introducing young people to the classics and kindling enthusiasm for reputedly serious music.

Whereas many conservative contemporaries wonder whether uncompromising excellence and popularity, art and commerce can or may even be reconciled, David Garrett long ago proved that it is possible, enthralling listeners of all ages. The same new, incredibly electrifying spirit pervades lofty Philharmonic halls holding sold-out classical concerts and open-air arenas staging crossover programs. The people sense that they are being taken seriously, that a person is performing who approaches the task with utmost discipline while creating an awareness for various musical genres and styles. Garrett’s desire to diminish the awe of classical music felt by young audiences, in particular, to spark a whirlwind in the music scene while striving to sweep as many people off their feet as he possibly can is fulfilled to an overwhelming degree.

David Garrett is not only a technically brilliant recording artist who has received the praise and support of such eminent violin virtuosos as Isaac Stern, Yehudi Menuhin and, in particular, Ida Haendel. His greatness is also reflected in his mental countenance. As one of the few classically versed artists, he has an undistorted perspective on tradition and modernity. Thinking in terms of fixed categories is foreign to him. “In my eye, the Paganinis, Liszts, and Chopins of the 19th century were the world’s first rock stars,” he says. Garrett knows the secrets of great music and understands that the more substance a work has, the more possibilities an artist has to make it his own and place it in new contexts.”

Thus his musical expertise inspired him to interlace Michael Jackson’s Smooth Criminal with Mozart’s Turkish March – and he did so before Michael Jackson’s death before the world paid tribute to this exceptional talent. David Garrett sets trends of his own because he is also ahead of his time. And yet he knows that talent and a command of one’s instrument do not suffice alone if one is to intellectually and spiritually penetrate a work and gain a grasp of it. A background knowledge of music theory enables the well-traveled artist to analyze and scrutinize scores. “Many great works are unbelievably rich in diverse possibilities. A certain passage in Mozart’s Turkish March and one in Smooth Criminal have almost the same harmonic progression. This goes to show that apart from instrumentalization, music has hardly changed at all over the past 250 years. We continue to work with the same material.”

The artist was rewarded with an ECHO Classic 2008 in the category “Classic without Borders.” The “Encore” followed fast on this first success in October 2008, even surpassing the former release as a follow-up album. In the USA, “David Garrett” stayed number one in the classical and classical crossover charts for months.

With the album “Classic Romance”, released in November 2009, the violin virtuoso returned to classic turf. He created a special, very personal CD centering around Mendelssohn’s violin concerto, accompanied by seven small works from the Classic and Romantic periods. “Classic Romance” had an enormous resonance, winning Garrett the ECHO Classic 2010 in the category “Bestseller of the Year.” “Classical music is where my heart lies, and I am elated that I succeed in bringing my message across to the audience.”

In June 2010, all previous musical activities of the star violinist culminated in a further exciting challenge: Rock Symphonies. At the legendary concert at Park Wuhlheide in Berlin, David Garrett delivered an unprecedentedly individual “musical address” to his multi-generational audience. Classics from all epochs – from the Baroque Age to modern times, from Bach to Nirvana – are presented in a newly arranged symphonic idiom. Once again his courage to embrace new things was rewarded.

In 2011, he received no less than two ECHO awards for his “Rock Symphonies”. The DVD “David Garrett: Rock Symphonies – Open Air Live” was distinguished in the category “Best Domestic DVD Production” and as “Best Artist” in the category “Rock/Pop Domestic”. “To date,” Garrett says, “‘Rock Symphonies’ is my most extraordinary and ambitious project. For this reason I look forward to getting together with the guys in my band, the orchestra and the audience on the 2011 Tour. For me, these people are all part of one large musical family.”

After his successful Rock Symphonies Tour in 2011, David went back to his classical roots. In the autumn, the star-violinist was Honorary Judge in the category violin at the International Music Competition Cologne. He fulfilled his lifetime-dream with the recording of the DECCA album “Legacy”, which was first released in Germany, Austria and Switzerland. On this CD, you can listen to the Beethoven Violin-Concerto, which David considers this “the ultimate masterpiece of the violin repertoire”, plus various works by Fritz Kreisler.

Legacy proved to be an exceptional success. As soon as the album was released, it reached rank six on the overall charts in Germany, the highest-ranking instrumental classical album in German chart history. In January 2012, the album reached gold status. Legacy was released in the UK on 12th March and in the US on June 05.

An Evening with David Garrett, and his band, with a symphony orchestra
March 10, 2016
Roy Thomson Hall
Toronto, ON
Presented by Terra Cotta Financial Group

Accompanied by a symphony orchestra at Toronto’s illustrious Roy Thomson Hall, David, and his band will push the limits between pop, rock and classical. This performance is sure to awaken your senses.

David’s newest album, Explosive, includes 11 of David’s own compositions plus some great classical music – and covers of songs by the likes of Ed Sheeran, Metallica, and Eminem.

“He’s the long-haired violin virtuoso that blurred the lines between Mozart and Metallica.” ClassicFM.

David’s first Canadian concert in 2012 was an extension to his Rock Symphonies tour – a collection of rock and metal songs. He played with his band and the Edmonton Symphony Orchestra at the Winspear Centre for Music to a sold out crowd.