This past Friday, Against the Grain Theatre (AtG) gave the final of four sold-out performances of their latest venture, Death & Desire, featuring mezzo-soprano, Krisztina Szabó, bass-baritone, Stephen Hegedus, and pianist, Topher Mokrzewski. Billed by Toronto Life as “the City’s most inventive opera company” one can certainly understand why, given the uniqueness of Death & Desire – a foray into the realm of art song.

So what happens when you attempt to interweave a revered early 18th century song cycle by Franz Schubert, with a song cycle by one of the greatest musical minds of the 20th century, the French maître, Olivier Messiaen? Or are the differences in language, poetry and musical vocabulary simply too extreme for such a juxtaposition?

Die schöne Müllerin (The Beautiful Miller Maid) is a cycle of songs by Schubert based on the poetry of German romantic poet, Wilhelm Müller. Throughout the course of its 20 songs, the cycle tells the plight of a young apprentice who falls in love with the daughter of the miller. His love for the aloof beauty, however, is unrequited and, in despair, he drowns himself. There is a strong narrative thread to this cycle, and the music shows Schubert at his lyric best. The songs are deceptively simple and direct – some almost folk like – yet they remain profound and deeply moving.

Messiaen’s Harawi, chant d’amour et de mort (Harawi, song of love and death), on the other hand, is based on cryptic surrealist poems penned by the composer himself. Messiaen’s 12 movement Harawi (a type of Peruvian folk song often dealing with “unhappy or lost love, sometimes combined with a longing for death”) displays autobiographical elements and was written in 1925 during a difficult period of his first wife’s ever-declining mental health. These songs also represent some of the few secular pieces that Messiaen – a devout Catholic – was to compose. Unlike the Schubert, Messiaen’s songs are less a cycle with a clear narrative thread than a series of ruminations or contemplations on love and death. As for the piano part, the writing is fiendishly difficult, filled with Messiaen’s complex bird songs.

As the Schubert cycle has the cleanest narrative with a beginning, middle and an end, AtG performs it complete and in concert order. The Messiaen songs are then worked in and around the Schubert songs. Although the interweaving of the two cycles – one in French and one in German – works surprisingly well in places (as in the concluding half dozen movements/songs), the overall production has its bumps and lumps. 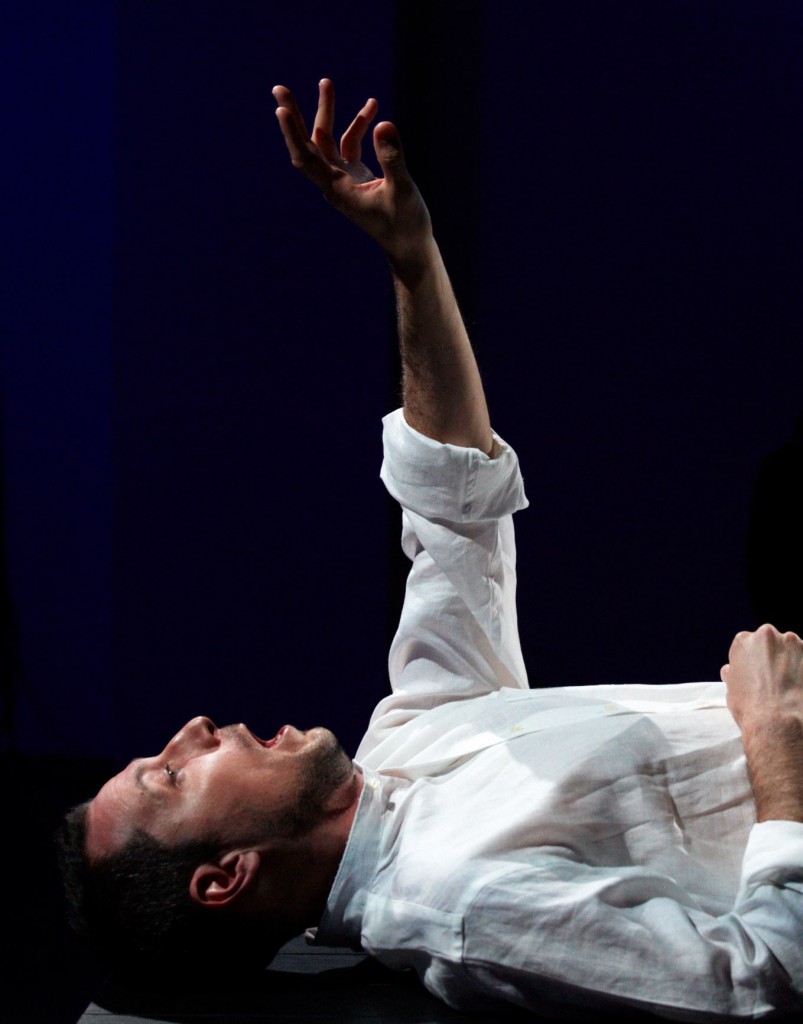 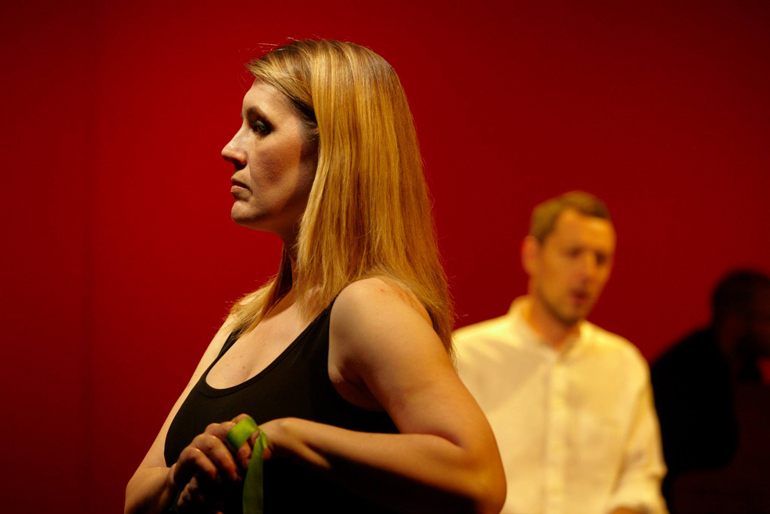 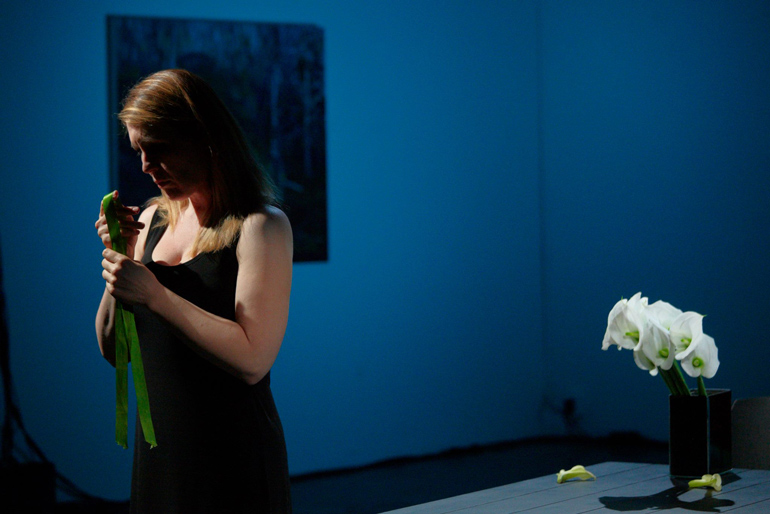 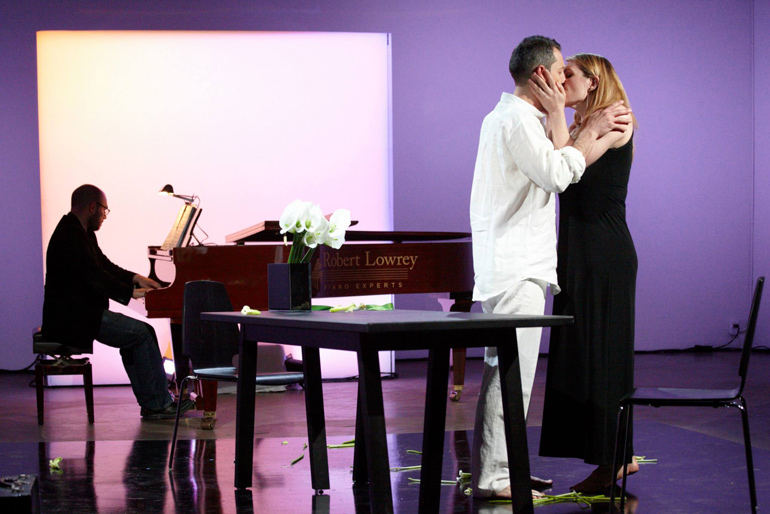 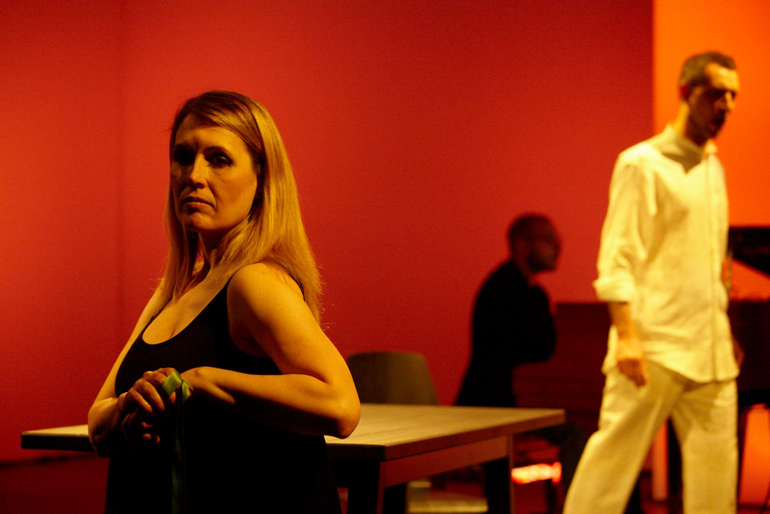 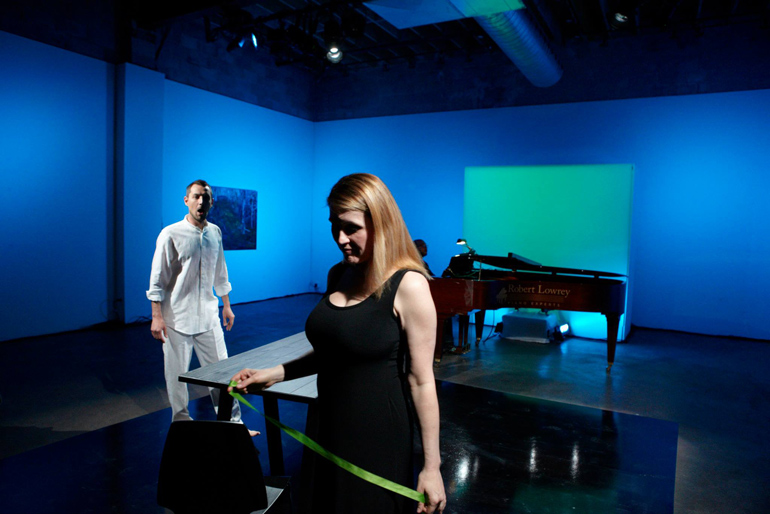 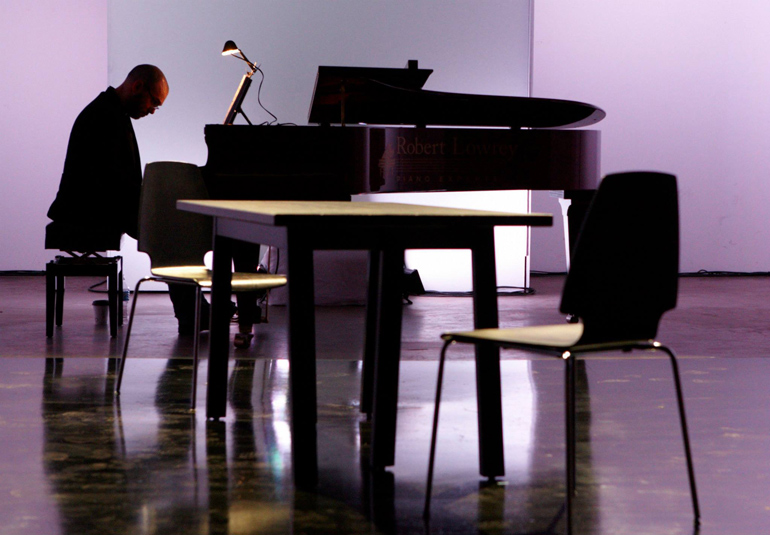 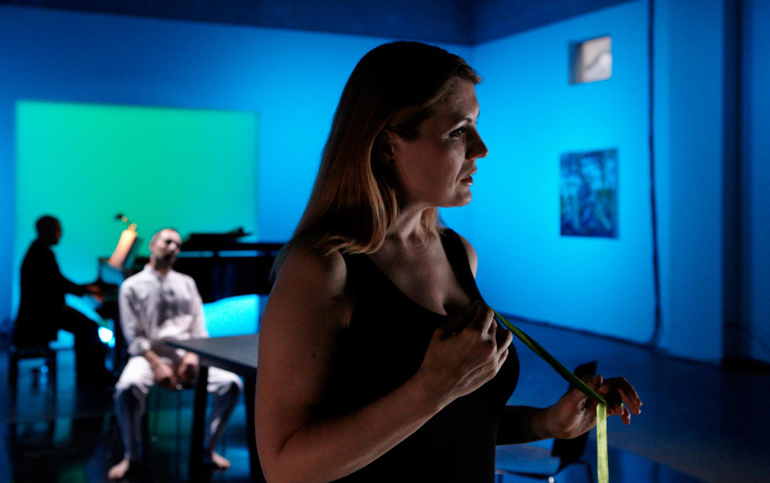 Fresh from her triumphs as “the woman” in the Canadian Opera Company’s recent production of Arnold Schoenberg’s monodrama, Erwartung. Szabó took on the role of “the woman” in AtG‘s new art song project as well.

For Harawi, Messiaen called specifically for “a strong, dramatic soprano voice mostly in the in the medium and low register, despite forceful high Bs”. He had in mind the voice of the French Wagnerian soprano, Marcelle Bunlet (who also premiered his songs, Poèmes pour Mi). But in the intimate acoustics of the 115-seat Neubacher Shore Contemporary gallery on Brock Street, one did not need to worry about vocal projection.

When the house lights dimmed, and Szabó began to sing softly at the back of the hall, I was held spellbound. From then on she inhabited each song with a dramatic veracity rarely found on the recital stage. But it was her sensuality of both body and voice that entrapped her audience. Whether it be death or desire, her interpretive genius was in full evidence throughout. Her singing of Messiaen’s onomatopoeic Doundou tchil (which Messiaen wrote to sound like ankle bells in a Peruvian folk dance) is turned into a vicious attack by a raving psychopath. Not what Messiaen intended, I’m sure, but it made a powerful conclusion to Part One of the evening.

Canadian bass-baritone Stephen Hegedus (as “the man”) seemed somewhat vocally unfocused at the beginning of the show, but his soft-grained voice grew in strength as the evening progressed. While he pales somewhat in comparison to Szabó as an actor, there was a sincerity and involvement that held him in good stead. The physicality between the two artists – the touching, the kissing, the caressing – all felt real and natural.

With a running time of roughly 60 minutes for each half of the programme, pianist and Music Director, Topher Mokrzewski, clearly had his work cut out for him. A fearless pianist if ever there was one, Mokrzewski gave it his all.

So, does Messiaen blow Schubert out of the water? The answer is a simple, “yes”. Would I go to see it again? The answer is a more hesitant, “yes”… but “yes” nonetheless. Given the harmonic language and the relative fragility and intimacy of the Schubert songs, they simply cannot compete with the muscularity, virtuosity and complexity of the Messiaen’s piano and vocal writing. It makes Schubert sound insignificant. Which he is not.

The major problem, I believe, is one of pacing and awkward joins between pieces. The programme needs to breathe more. It’s an arduous experience as much for the listener as for the performers. Perhaps having a second piano and second pianist (a female Doppelganger) could create opportunities for moments of choreographed silence involving all four in the action – particularly at those moments where musical juxtapositions are awkward. Plus this would allow both pianists to remain in their musical groove – as the singers are.

Reservations aside, Founder and Artistic Director, Joel Ivany, must be thrilled with the results and commended for his ingenuity and daring.