The Canadian Opera Company. Rossini’s The Barber of Seville at the Four Seasons Centre, April 17, 2015.

“April” may be “the cruelest month” for some, but not for the Canadian Opera Company. After an arduous, seemingly endless winter, the COC opened its spring season with temperatures soaring to 19ᴼ C and with sunny blue skies.

It was with this sense of renewal in the air, that audiences took to their seats on Friday evening for the premiere of the COC’s much-anticipated new production of Gioachino Rossini’s comedy, The Barber of Seville (a co-production with Australian Opera, Houston Grand Opera and Opéra National de Bordeaux).

The production was the brainchild of director Joan Font and his colleagues from the Spanish group known as Els Comediants (a collective of musicians, actors, artists, etc.). Together they brought a creative freshness to Rossini’s masterpiece, providing a welcome relief from the usual cookie-cutter productions that one often encounters of this splendid opera buffo. Although not without its longueurs, Els Comediant’s production of The Barber of Seville – especially coupled with the energy and vocal talent of the largely youthful cast – made for a splendid evening out.

The plot of Rossini’s Figaro is an old one: Count Almaviva and Rosina are in love. She, however, is the ward of the much older man, Don Basilio, who keeps her under lock and key. As Don Basilio has his own amorous designs on Rosina, it is left to the ever-resourceful barber of Seville, Figaro, to make sure that all’s well that ends well.

Having read about Els Comediants and their productions, and having seen their previous work with the COC ( Rossini’s Cenerentola in 2011), I actually expected much more than was offered. There were some bewildering elements (who is that bent over old crone dressed in black who creeps around the stage?); and some notable miscalculations (such as the confusing storm sequence involving, I’m told, a hat.) But there were other truly inspired sequences (such as the riotous “Music Lesson” scene revolving around an enormous red grand piano with a keyboard that stretches for 9 or 10 feet in length. When the lid is put up, the piano becomes a sailboat in which the lovers escape.

One troublesome aspect of the production is the lighting. While the stage is often a riot of colour – from the deep pink plumage on the soldiers’ helmets to the orange vest of Basilio), colours lost their impact. The opera’s opening serenade takes place – rightfully – at night, but the rest takes place in Basilio’s home in which Rosina is under lock and key – and apparently kept in the dark. 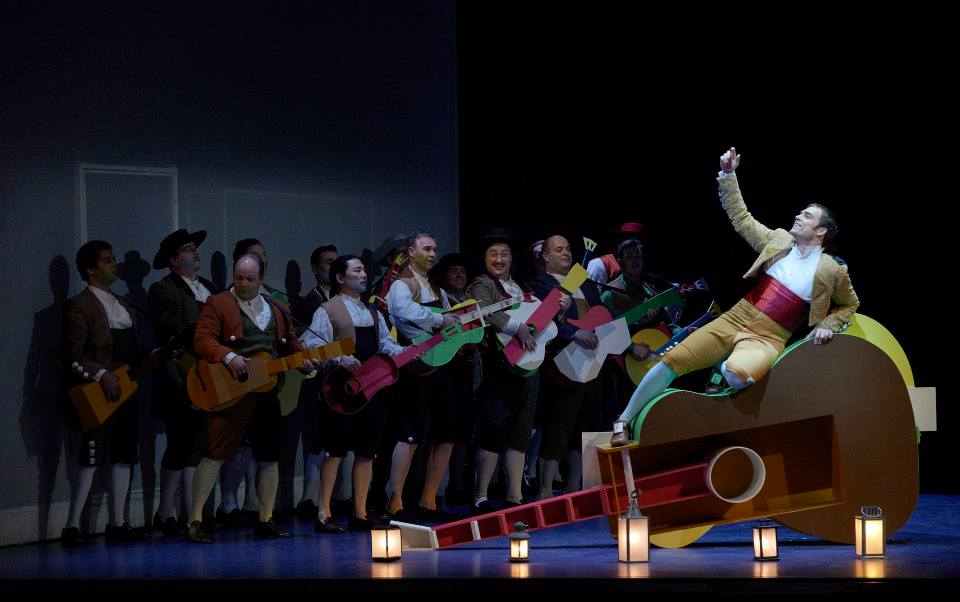 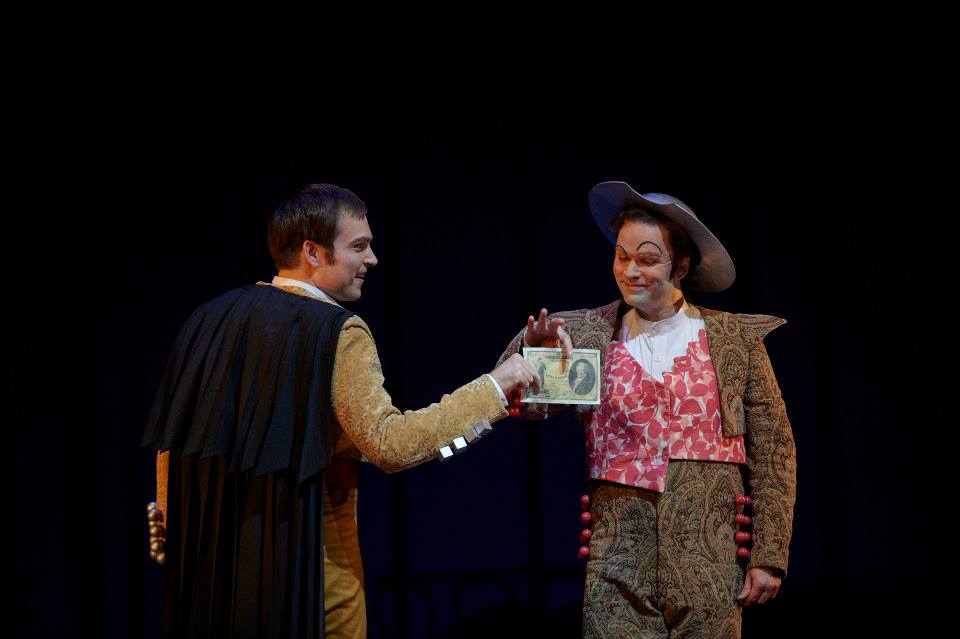 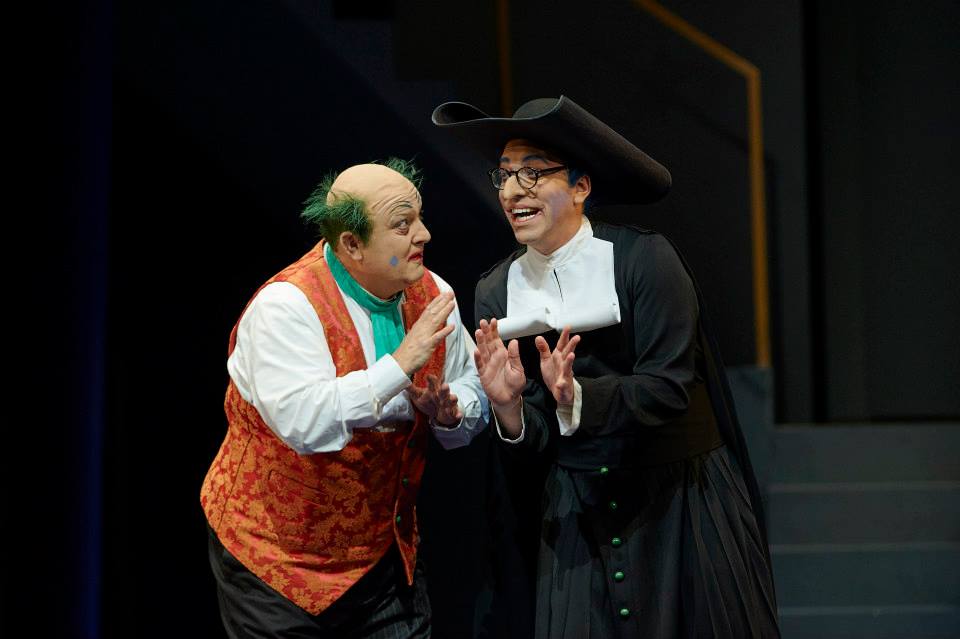 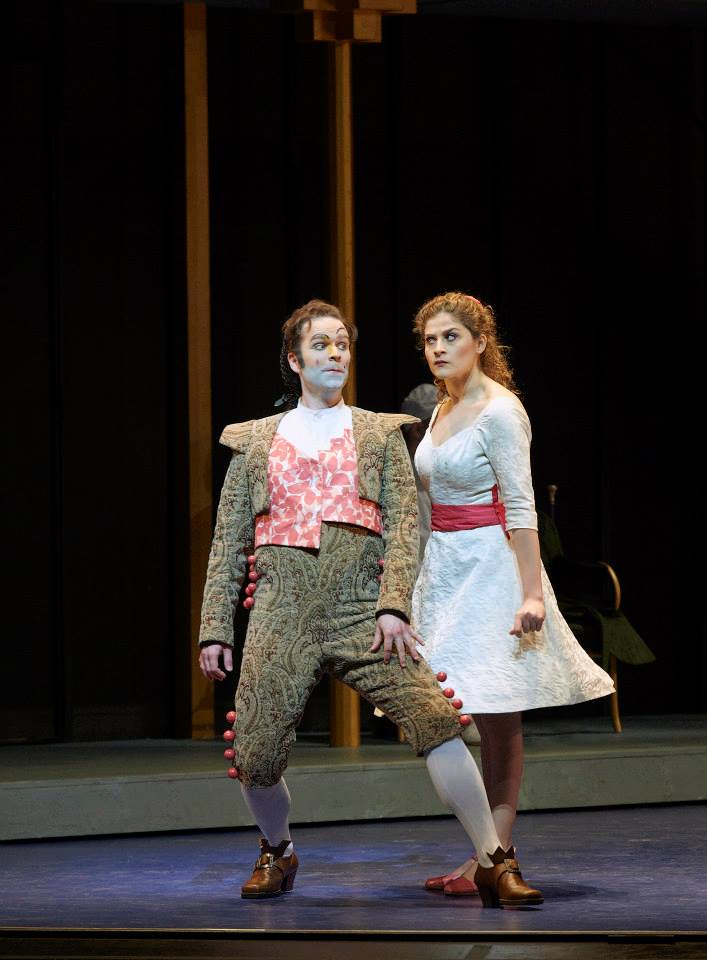 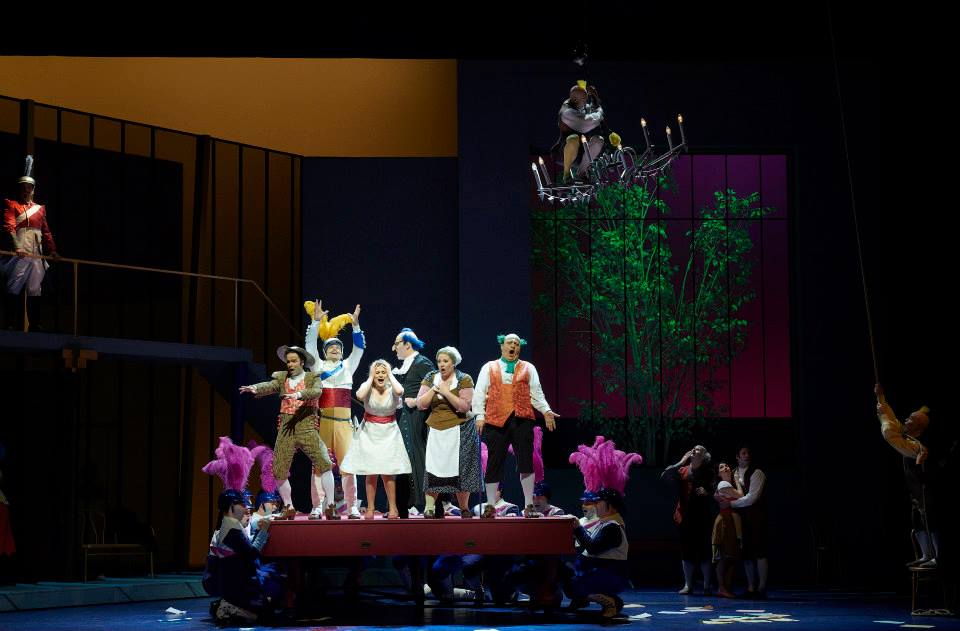 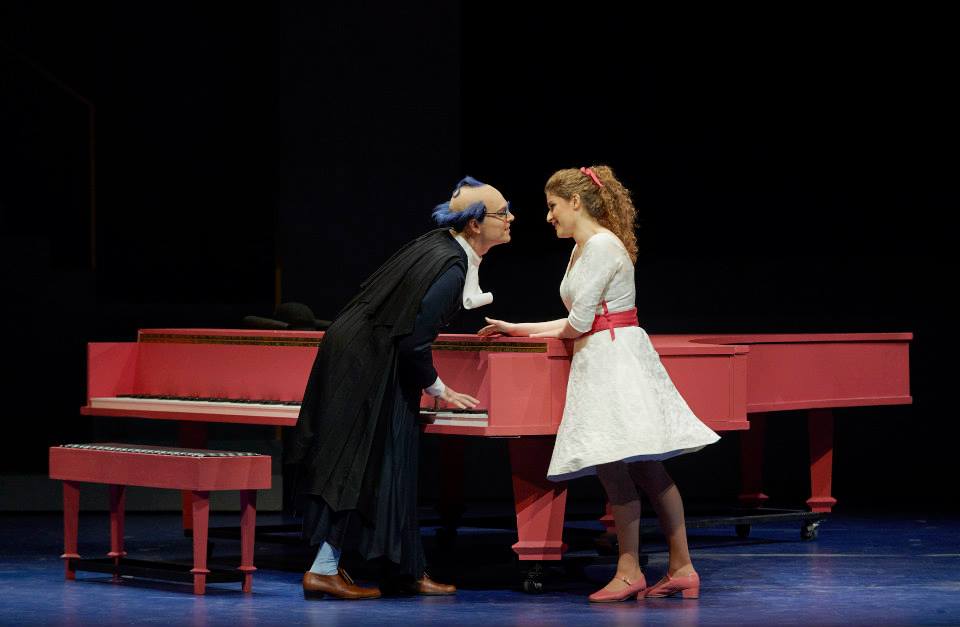 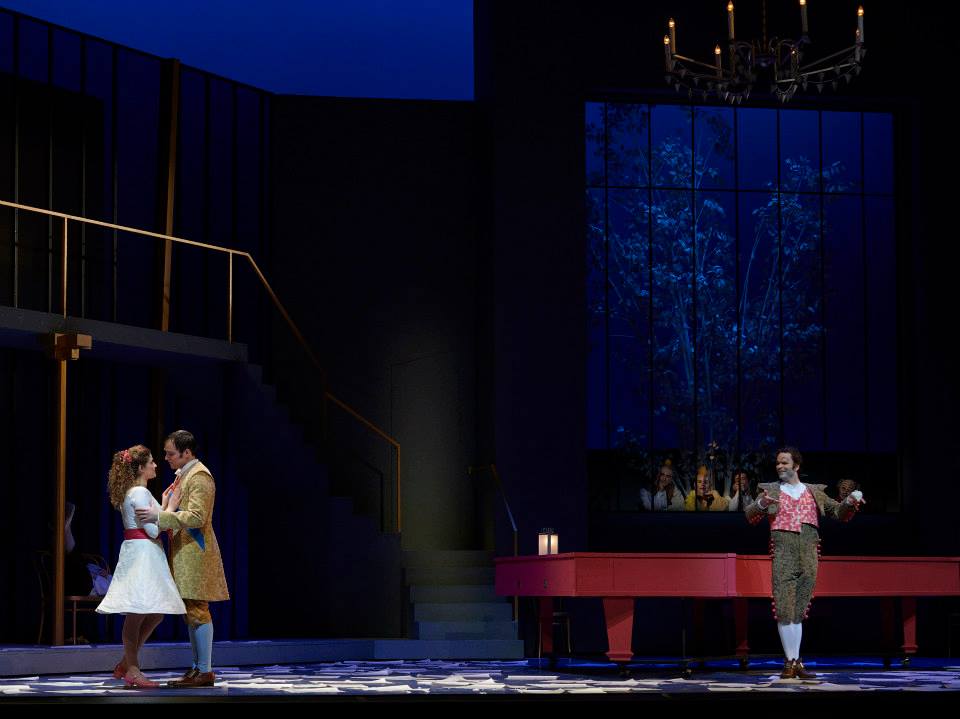 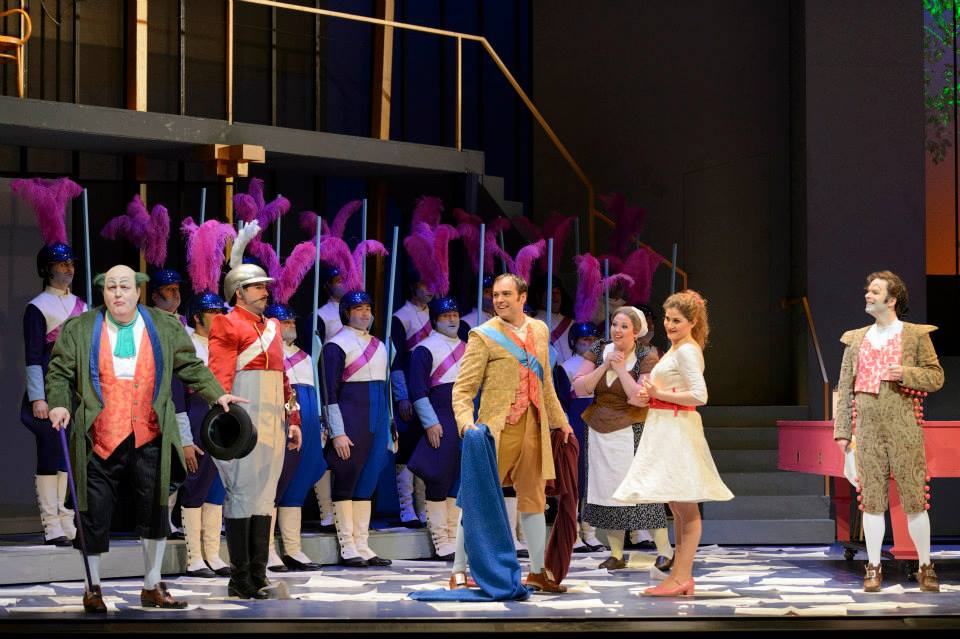 Canadian baritone Joshua Hopkins tackled one of his most successful roles to date: Figaro. Vocally, the role fits him perfectly. As a thespian he moves with both ease and spontaneity. Although most of the roles are double cast, Hopkins is scheduled to sing all twelve performances.

Rosina is sung by the handsome Italian mezzo-soprano, Serena Malfi, who has a voice that seems to purr seductively at times. It is an agile and beautiful instrument throughout its compass, capable of producing a large sound (although perhaps a bit strident at the extreme top).

Alek Shrader’s elegant tenor (Count Almaviva) is also a thing of beauty. One of many vocal highlights of the evening was his Act I duet with Figaro – here their voices blended so tightly that it sounded as if only one person was singing. He, like Hopkins, is clearly an artist to watch.

Renato Girolami (Doctor Bartolo) is an accomplished Rossini singer. No wonder, as he was a student of the great Sesto Bruscantini. His rapid parlando passages are worth the price of admission alone.

Canadian bass, Robert Gleadow (Basilio), continues to develop, apart from some small, but chronic pitch issues. He is, however, a prize on stage. His account of the aria, “La Calunia” was characterful and entertaining.

The promising young Calgarian soprano Aviva Fortunata (now in her second year of the COC’s Ensemble programme) sang the role of Rosina’s governess, Berta. She too has a large, healthy voice, and is another emerging artist. She provides a bit of champagne casting for a not very satisfying role.

Although the 34-year-old Scottish conductor, Rory Macdonald and the COC Orchestra gave a perfectly creditable and spirited account of the score, one could only wish for a bit more sparkle. Chorus Master, Sandra Horst, however, once again, showed how good a chorus she has built up over the years.

This new COC production of Rossini’s The Barber of Seville runs for 11 more performances at the Four Seasons Centre for the Performing Arts (until May 22nd). A special Ensemble performance will take place on May 15th.