The Maestro & The Master: Building the New Mariinsky: a 60 minute documentary revealing the journey behind creation the Mariinsky Theatre II in St. Petersburg, Russia.

Jack Diamond isn’t a musician – but he’s been a big influence on the classical music scene in Toronto. Many opera fans will recognize him as the architect of the Four Seasons Centre for the Performing Arts, where the Canadian Opera Company and the National Ballet of Canada perform.

The Four Seasons Centre was Diamond’s first opera house. But since it opened its doors in 2006, he has worked on other theatres and concert-halls – most notably, the Maison symphonique in Montreal and the Mariinsky Theatre II in St. Petersburg, Russia.

The construction of the Mariinsky II, which opened in 2013, is the subject of a new documentary film by Yosif Feyginberg. The Maestro and the Master received its premiere screening at Toronto’s Design Exchange on Wednesday night. Both Diamond and Feyginberg were in attendance.

The film was shot over three years, and its central theme is the struggle to build the Mariinsky II, in the face of a labyrinthine Russian bureaucracy. A secondary theme unfolds in parallel: the close working relationship between Diamond and the Mariinsky’s artistic director, Valery Gergiev. (Hence the title.)

We learn – through footage of Gergiev in Toronto touring the Four Seasons Centre, and also in Montreal at the Maison symphonique – how the influential conductor came to admire Diamond’s buildings. At one point in the film, Gergiev remarks, “It was at the Four Seasons Centre that I decided we had to get someone who knew how to build an opera house.”

When Diamond got involved with the project, the Russians had already made an expensive mistake. They initially selected a grandiose design by the French architect Dominique Perrault. Construction had begun, but was cancelled when costs skyrocketed. By contrast, the firm of Diamond and Schmitt was known for its good track record for staying on budget and on schedule. And when a new competition was held to replace Perrault, down-to-earth Canadian know-how won out.

However, Diamond’s understated design soon became controversial in St. Petersburg. One critic dismissed the Mariinsky II as “too pragmatic” for a city with a glorious architectural tradition. Yet if Diamond’s approach struck some Russians as strange, any Toronto opera-fan would find the new theatre very familiar.

As the camera explores the rising building, it becomes apparent that the Mariinsky II is a Four Seasons Centre on steroids. Although it’s bigger than the theatre at Queen and University, it shares many of the same characteristics: lots of glass, a large, spacious foyer, and a small performance space that’s a dead-ringer for the Richard Bradshaw Amphitheatre. Like the Four Seasons Centre, the Mariinsky II is a building designed from the inside out: the auditorium has a state-of-the-art orchestra pit and a spacious backstage.

As a film, The Maestro and the Master mirrors the pragmatism of Diamond’s opera house. It does what a documentary is supposed to do: offer a guided tour through events as they unfold, building a narrative through interconnected moments and events. There are an awful lot of “talking head” interviews, and there are times when the editing is abrupt and choppy. But there’s also some breathtaking cinematography that captures the beauty of St. Petersburg – including a scene where Diamond takes a boat tour on the Neva River. And, of course, there’s a happy ending: the theatre is completed, and is opened with a spectacular inaugural concert, vividly captured by the camera.

But does this documentary tend to gloss over the challenges Diamond faced in building the Mariinsky II? At least one person in the audience seemed to think so. Immediately following the screening, Diamond stepped up to the podium to explain that he had to build his theatre on top of a foundation already laid for the abandoned Perrault project. He made it clear that this is not a normal or desirable thing for an architect to do.

After his speech, I asked him if it’s easier to get things built in Canada than it is in Russia. “Oh, it’s much easier in Canada!” he declared. “You wouldn’t believe the problems I had over there!”

A much larger audience will have the opportunity to see The Maestro and the Master when it is broadcast by TVOntario on June 19. 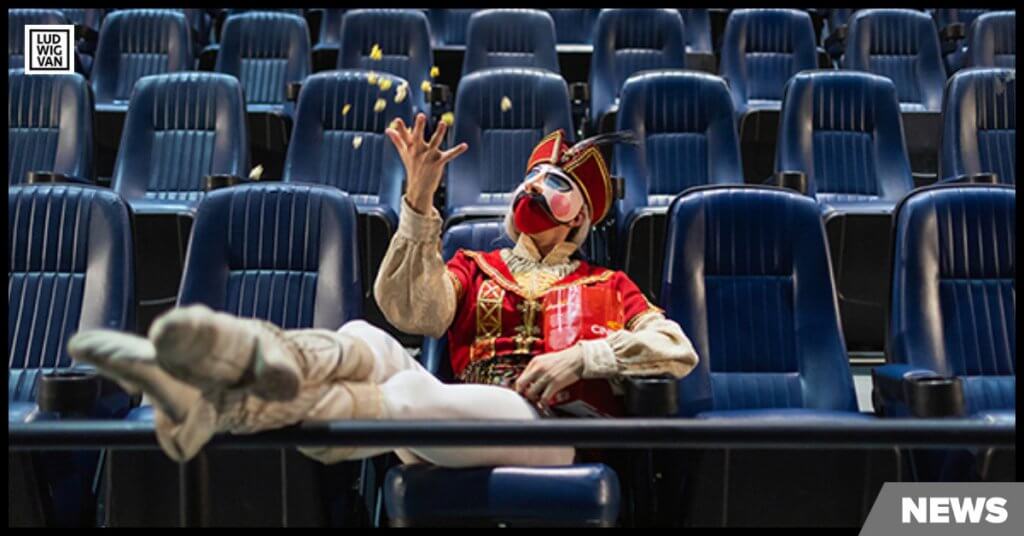 In a surprise announcement yesterday, the National Ballet has partnered with Cineplex Events to ensure that Canadians across the country will be able to enjoy the magic of The Nutcracker this holiday season.
(Continue reading)
Read the full story Comments
Share this article