THE VOICE | Gianandrea Noseda Tells All

The dynamic Italian conductor, Gianandrea Noseda, needs little introduction to Torontonians. Since his local debut in April 2002, he has conducted nearly a dozen programmes with the Toronto Symphony Orchestra. For his upcoming appearance, however, Noseda is bringing his own orchestra and chorus from the Teatro Regio Torino in Italy, together with eleven soloists for a single, not-to-be-missed, concert performance of Rossini’s epic William Tell.

“I have a particular love for Toronto,” the 51-year-old maestro says in his fluent, lightly accented English, “and, of course, this love affair is due to my work and music-making with the Toronto Symphony Orchestra over the past twelve years . But now I also have many other friends in Toronto. So it is a city that, when I don’t come for a while, I miss it.”

This appearance by the Teatro Regio Torino is being presented by the Toronto Symphony Orchestra and is one of four stops on the company’s short North American tour (other cities include New York, Chicago and Ann Arbor). “When we first started to organize this tour with the orchestra, chorus and soloists,” says Noseda, “my intention was always to include Toronto because I think that I have a special rapport with the city and with the audience.

“And for me,” Noseda says, “it is a privilege to bring my company to perform such a great work as William Tell. Plus I think that it is my duty to show how, in Italy, we perform Italian repertoire – especially in the area of opera. 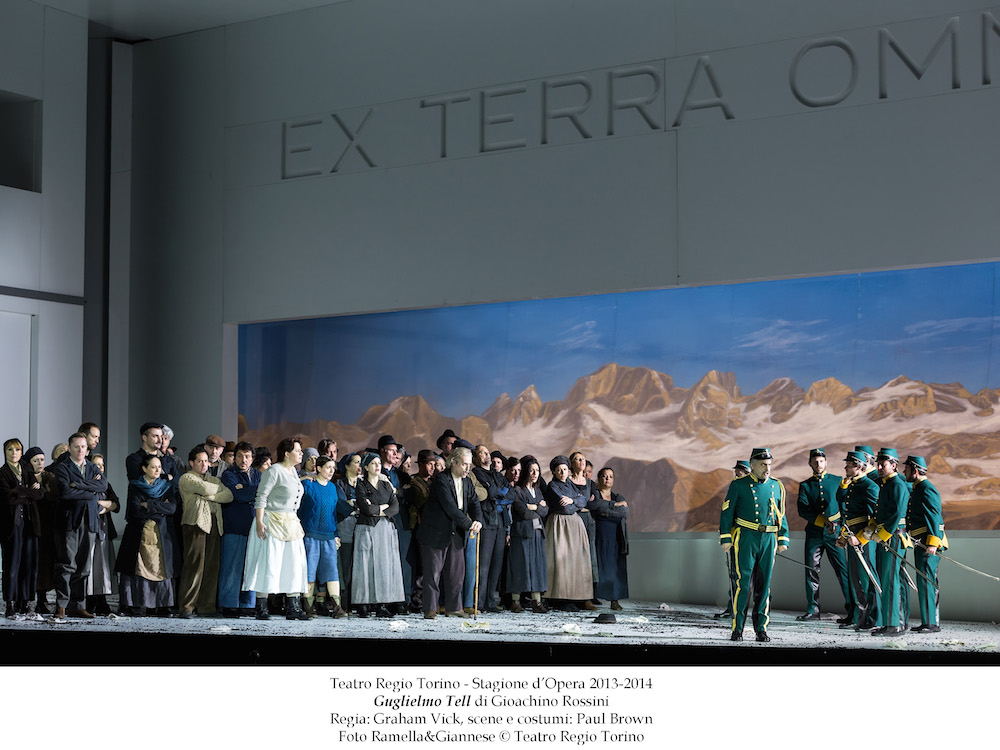 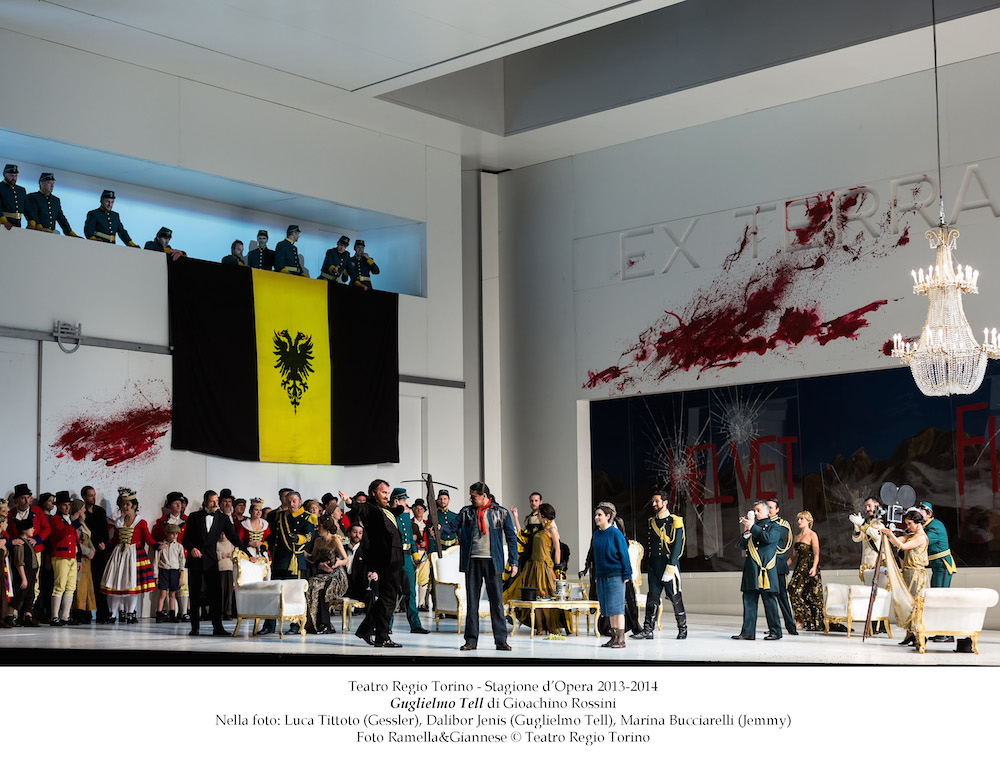 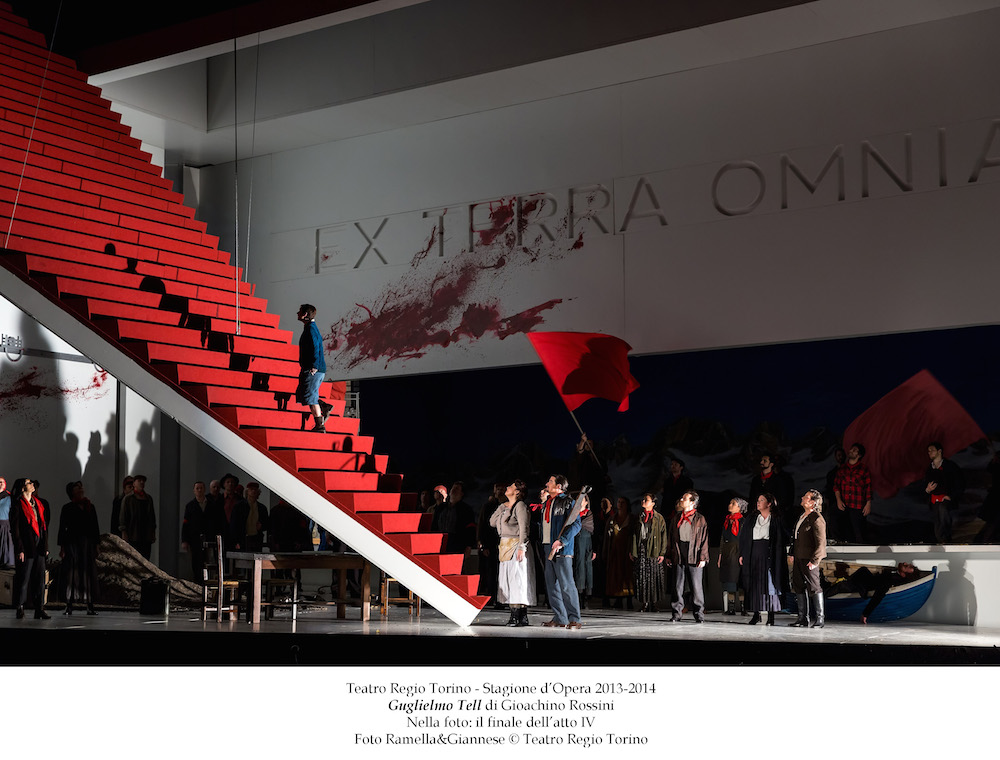 When asked why he would choose an opera not much performed in North America and therefore not well-known by audiences, Noseda defends his choice with enthusiasm and certainty. “The William Tell Overture, as we know, is incredibly well-known, but the rest of the opera is no less beautiful. It has been neglected because Rossini is mostly seen as an opera buffa composer – the composer of Il barbieri di Siviglia and Cenerentola. But what I actually like are Rossini’s serious operas – the opera seria – such as Semiramide, Tancredi, and William Tell.”

“Of course,” Noseda continues, “if you put on an unknown opera by an unknown composer, it might be difficult to market and to sell. But to put the name of Rossini – who is one of our biggest geniuses in music and very well-known – together with a not very well-known opera, it might be reason enough for people to say, ‘Why don’t we go and listen to this Italian opera by Rossini performed by an Italian opera company with an Italian conductor.'”

William Tell has not been seen at the Metropolitan Opera since 1931 – 83 years ago. But one of the main reasons for this is not so much a question of the quality of the music, but because the opera is so difficult to cast, due to the lack of appropriate singers. “True, “says Noseda.” “The tenor role of Arnoldo – for example – is a particularly difficult and risky one. And when Maestro Riccardo Muti did William Tell at La Scala, it was Chris Merritt who sang the role of Arnoldo. But after Merritt it was like a desert. There were no tenors who wanted to or who could sing the role. But in the last seven or eight years, we now have at least four international tenors who are able to handle it.”

Rossini’s opera – the last of his 39 such stage works – is based upon Schiller’s play about the Swiss folk hero, William Tell. Set in the 14th century, the opera recounts the story of Tell – a Swiss patriot – whose skill with the crossbow, is legendary.

Gessler, the much hated Austrian governor, erects a post in the town square on which he places his hat. All Swiss who pass are made to bow their heads in respect. Tell and his son, Jemmy, refuse to do so and are arrested. Gessler then tells them that Tell can save their lives if he can shoot an arrow through an apple balanced on his son’s head. If not, they both die.

Rossini composed his William Tell originally in French (Guillaume Tell) for the Paris Opéra where it was premiered in 1829. It was originally cast in four acts and ran for over four hours. After a few performances, however, management began whittling away at the lengthy score – eventually cutting it down to three acts.

According to one source, Act II was occasionally excised and used as a curtain raiser for other works. One anecdote tells of Rossini encountering a fan one day who said with a certain excitement, “Maestro, we are going to hear Act Two of your opera tonight.” To which Rossini is supposed to have replied, ” What? The whole thing?”

For this tour, Maestro Noseda uses the official four act Italian version with a few small, judicious cuts. “We do two intermissions,” he says, “as we perform the 3rd and 4th acts together. I also cut a little bit of the ballet, and sometimes when we have a cabaletta repeated, I cut one part. But basically, even with the cuts, it will be a long evening with 3 hours and 40 minutes of actual music.”

When Noseda took over the mantle of the Teatro Regio Torino in 2007, it was very solid financially. “But artistically,” he says, “the company was not very well-known. But the potential of the orchestra and chorus was already very clear to me. That’s why I accepted the invitation to become Music Director of the theatre.”

“The orchestra was not very well-trained, but with day-by-day work, they can now perform whatever they want. And not only Italian repertoire. For example we recently performed the complete cycle of Brahms symphonies and concerti. So now we can perform whatever we like – and with style.” With nearly 200 people on this current four city tour, this concert version of William Tell is daunting, both logistically and financially. When asked about funding for such an enormous undertaking, Noseda says that, “We started with the help of the mayor of the city of Torino, and then we approached companies and individuals asking for their support for the project. Because in Italy, as you know,” Noseda continues, “public funding of the arts has been cut in the last seven or eight years. So to make this tour possible we had to involve important Italian companies, companies that also have interests in North America. And, as a result, we raised a very substantial amount of money.”

In addition to being Music Director of the Teatro Regio Torino, the much in demand maestro maintains a hectic schedule of international appearances. Not surprisingly, the tall, trim and fit conductor averages only about six weeks a year at home on the shores of Lago Maggiore (about a one hour drive to Torino). Born in Milan, Noseda is married to a former singer aptly called, Lucia.

Before concluding our interview I asked Noseda for his thoughts on the reasons why Rossini – a composer at the peak of his powers – should choose to retire from opera composition in 1829 at the age of 37 – particularly as he was to live for another 39 years.

“By the time of the premiere of William Tell, opera had gone through a big change. It was no longer a world populated by gods and goddesses, heroes and sorcerers and with castrati, women singing male roles, men singing female roles,… But Rossini was not interested. He composed his William Tell, in part, to show that he was able – if he wanted – to continue in this new direction. But he was not interested. But at the same time, he wanted to show the world that, ‘I am Rossini. And I am able to compose a masterpiece in this new style of opera. And now I’ve shown you what I can do. Now I put down my pen. Now I will enjoy life. But no more opera!‘

“William Tell is Rossini’s testament,” says Noseda, “and the last four minutes of the opera is, from my point of view, among the best and most beautiful music ever written.”

The TSO welcomes one of its favourite guest conductors, the dynamic Gianandrea Noseda, and the full Turin Royal Theatre Orchestra and Chorus (Teatro Regio Torino) for this exceptional concert production of Rossini’s final opera, the inspiring historical drama William Tell.