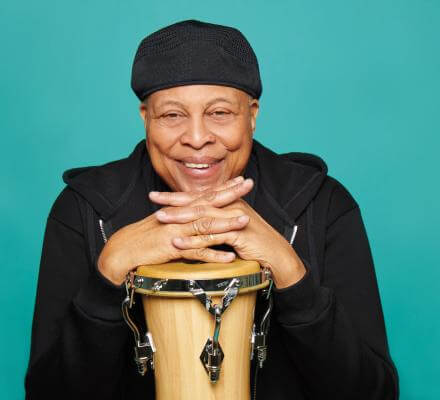 Godfather of Cuban jazz, Chucho Valdés, performs music from his newest release, Jazz Batá, revisiting his 1972 album of the same name. The complexity of batá – the deep classical music of West Africa – permeates Valdés’s piano solos. All three supporting musicians are from the Guantánamo region, with deep roots in Cuban musical culture as well as being conservatory-trained.

Chucho Valdés, Jazz Batá 2 was named one of Billboard’s 20 Best Latin Jazz Albums of 2018. “Chucho Valdés’ Cuban jazz masterpiece honors his father, the pioneering pianist Bebo Valdés. Jazz Batá 2 conjures ancestral African spirits, but also those of progressive jazz greats, classical composers and a century’s worth of Cuban popular music innovators. The founder of the definitive contemporary Cuban jazz group Irakere brings to the fore the timeless grace and continuous experimentation that marked his father’s career, and that has characterized his own artistic output.” (Billboard)