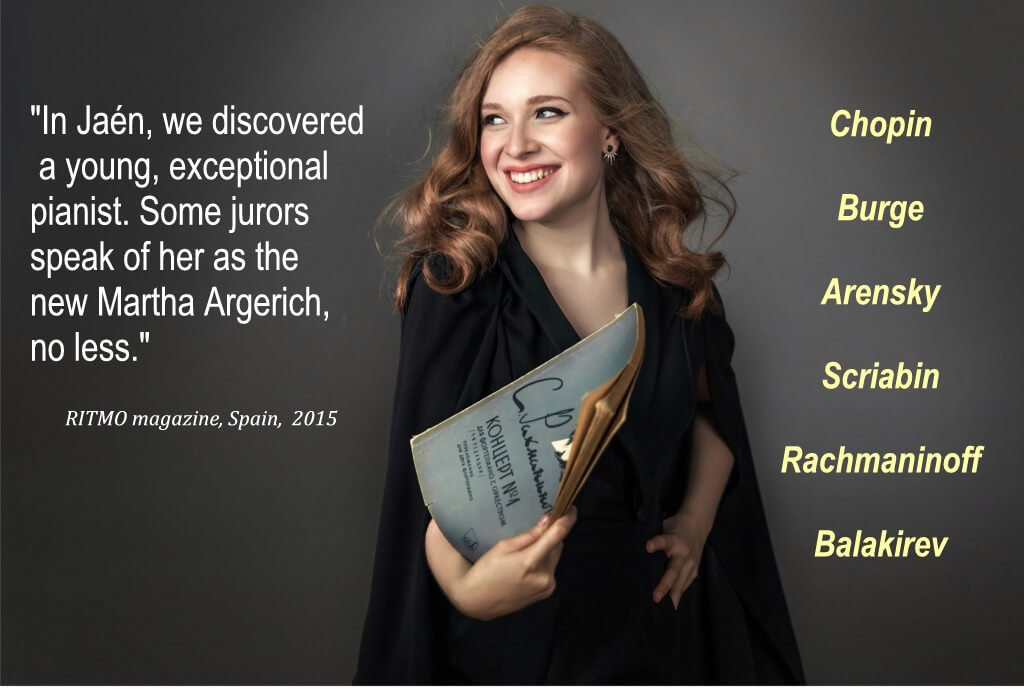 Since her orchestral debut in Kiev, Ukraine, at the age of seven, she had over 40 orchestral performances internationally and has worked with many great conductors and musicians, such as Peter Oundjian, Emmanuel Ax, and Bernhard Gueller. Ms. Rizikov also has played in master classes for Sergei Babayan, Vladimir Feltsman, Awadagin Pratt, Arie Vardi, Robert Levin, Ferenc Rados, Anatoly Ryabov, Oxana Yablonskaya, and has worked with András Schiff, Menahem Pressler, Gabor Takács-Nagy, and Olga Kern.

Anastasia’s concert schedules have taken her to Asia, all over Europe and North America, where she has performed in many famous concert halls and venues, as well as in numerous prestigious music festivals nationally and internationally, including the Orford Music Festival and the Verbier Music Festival. She recorded her CD “”Piano Recital” Laureate Series with NAXOS records, released on December 2, 2016.

In December, 2012, in honour of Glenn Gould’s 80th Anniversary Year and his Grammy Lifetime Achievement Award, The Glenn Gould Foundation has provided a C1X Yamaha baby grand piano to the “outstanding young pianist Anastasia Rizikov. Ms. Rizikov has the piano on an indefinite loan-basis to aid in her artistic and career development.”

This fall, she will tour the Northwest Territories as part of the PianoSix organization, aiming to bring world-class pianists to thousands of Canadians in remote communities, to inspire future generations of musicians and fans.