Opera is racist” may sound harsh, extreme, or even dramatic to the untrained ear. However, from our view, if we want progress and change we can’t shy away from calling a spade a spade.”

At the beginning of June, an unnamed group of people started an Instagram account called Opera is Racist (OIR). Dozens of posts quickly went up, all anonymous, no names, all with a common theme — the racism specific to being in opera.

The posts illustrate the institutionalized nature of the racism, displaying and linking the common Anti-Black, white-privileged sentiment at many of the most prestigious arts organizations around the world. Many of the stories detail accounts of outright racial aggression against artists, some even violent. Many talk of time in the education system as students whether abroad on training programs or exchanges or in the halls of their own universities. Almost all of them identify the power dynamics in play, experiencing racism from directors, tutors, private classes, mentors, funders, colleagues and more. And they powerfully convey the damaging impact from these racist actions. 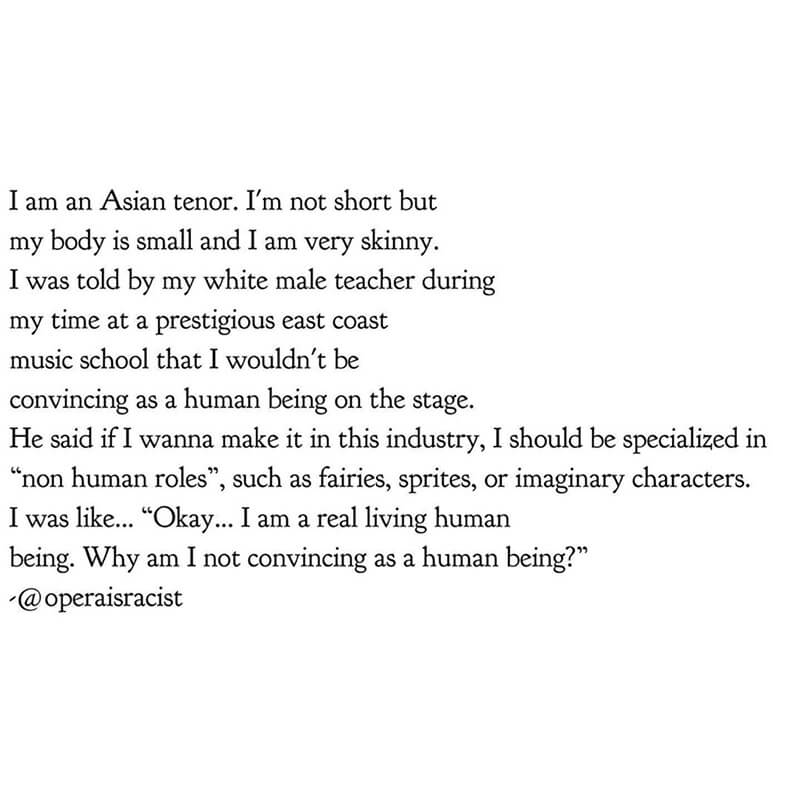 Conversations amongst racialized and marginalized communities in the performing arts are not new. Informal whisper networks have long existed amongst colleagues who warn each other about hosts of issues like sexual predators, unsafe spaces, and racist environments. Whisper networks operate when those in power refuse to right wrongs and when there is an inherent and persistent power imbalance. Opera is Racist highlights these lived experiences in stark text boxes, highlighting the casualness with which racist standards pervade the industry. The boxes also bear a reminder that the person who shared that story is someone who loves and has made their life in opera.

Opera houses around the world routinely dress, make-up, and wig white artists to appear Black, Egyptian, or Chinese, to name a few. Even more bizarrely, racialized artists are routinely made to look more “ethnic.” Production teams don’t consider costumes, make-up, and wigs on different skin colours. Lighting designers don’t learn or care to properly illuminate Black skin tones or those of other races. Ethnic characters are often stereotypes rooted in historical racist portrayals or stage behaviours. The stories on Opera is Racist show the commonplace impunity with which these caricatures of ethnic characters are imposed without regard for impact on the artists involved.

One of the most common themes amongst the Opera is Racist stories is the constant fixation of opera professionals with Black natural hair. Hair is attached to a person and an inalienable part of their body. 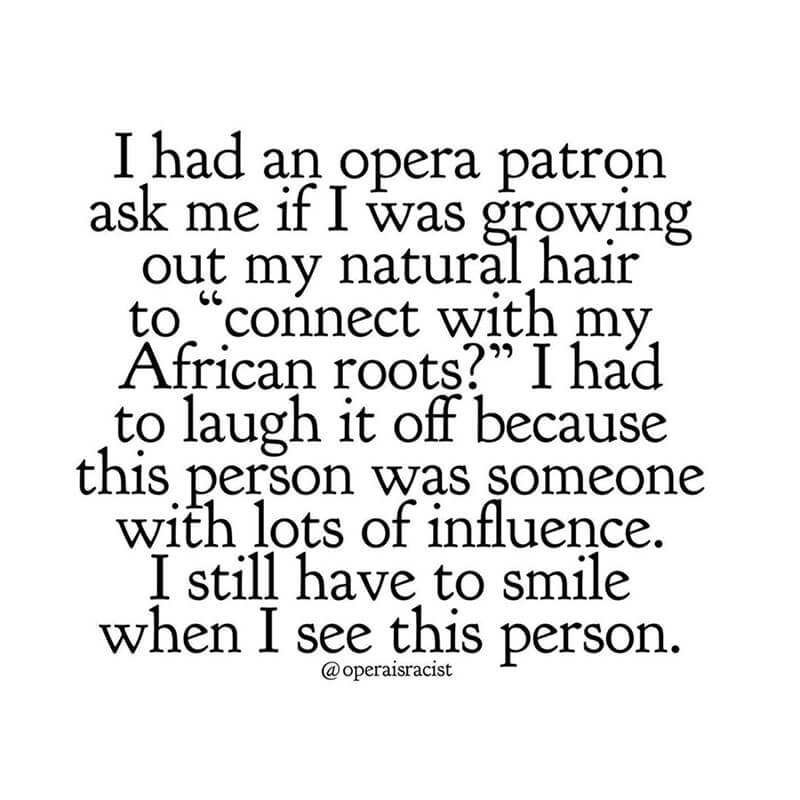 The experience of racism in opera isn’t limited to outside of Toronto or even Canada. These stories are also shared by many local musicians. One shared with me their own experiences, but more importantly, their commitment to act: “I’ve decided to stop making white people comfortable,” they say. “That’s why I’m staying put. I’m making space for myself and for others in the future. It wasn’t my original intent coming into this business 12 years ago. But then I see so much bullshit. I have no choice but to make it my business.”

The performing arts are a workplace for thousands of musicians across the city. And like any workplace, there are standards that all workplaces are expected to uphold. Derogatory and racist remarks over extended periods contribute to harassment and an unsafe workplace. In Ontario, a constructive dismissal is when a person is forced out of their job due to persistent passive or overt harassment. For workers who experience harassment, employers must have policies, training, and procedures to uphold. The fear is always that complainants open themselves to black-listing, loss of future employment, and ostracization. In a community like opera, where reputation and word-of-mouth are everything, the deck is stacked for those with power.

Arts organizations are not immune to the scrutiny of the current movement against Anti-Black and Anti-Indigenous racism. Many arts organizations misbelieve that limited instances insulate them from broader responsibility and that as long as they contain the incidents, there will be no harm. Many organizations undertake years-long consultations, meetings, townhalls, strategic planning, and priority-setting before taking action that replicates the same outcomes.

Anti-harassment is the law in Ontario. It is ultimately the responsibility and statutory obligation of employers to ensure their work environment is safe, healthy, and free of harassment and discrimination.

Opera is Racist gives voice to artists who aren’t willing to be quiet anymore, and audiences and funders are watching closely. Opera companies have participated in the black squares for #TheShowMustBePaused, the letters from the Artistic Director and Presidents stating their solidarity with the Black community, the word-salad social media posts about doing “better,” and nebulous commitments to diversity and inclusion. What’s the next step, and will it ultimately make real change?

There’s a conversation happening right now with #OperaisRacist and a challenge by artists to see if Opera can move towards being actively anti-racist.

Latest posts by Brian Chang (see all)
Share this article