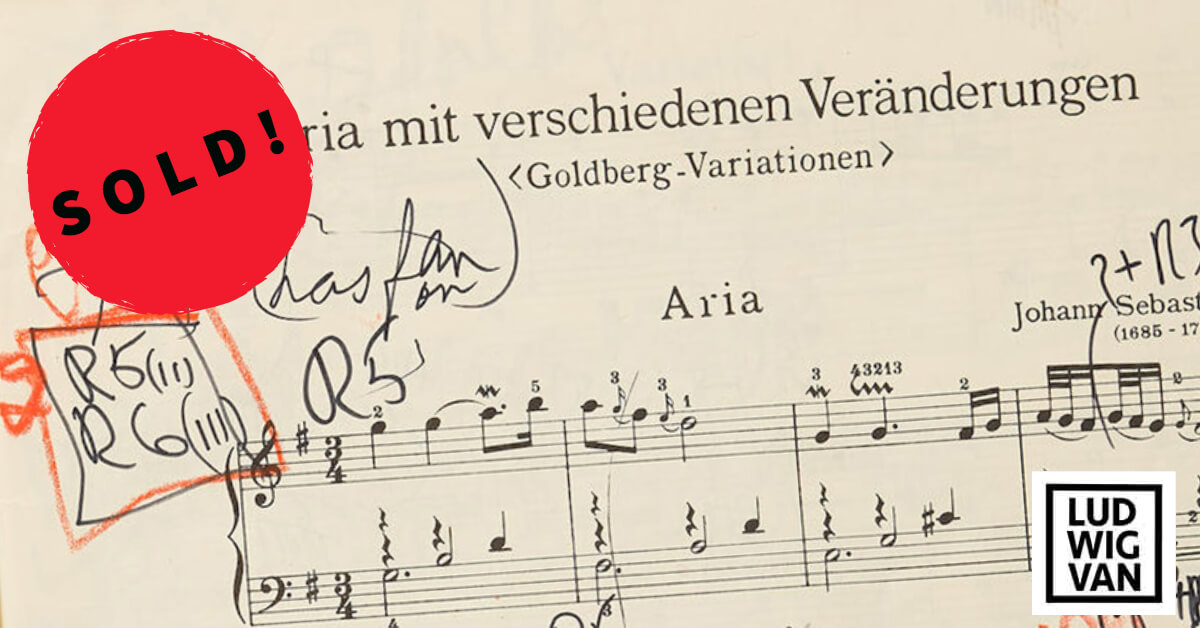 The USD 100,000 paid yesterday for one of the scores Glenn Gould used for his 1981 recording of Bach’s The Goldberg Variations establishes a benchmark price for further auction sales of the Toronto pianist’s intellectual work and ephemera. The sale to an anonymous buyer comes with a $25,000 buyer’s premium.

Markings on a commonplace C.F. Peters edition — Gould didn’t much discriminate between editions he used, own markings being the paramount distinction — were most likely memorandum of edits already made.

The manuscript is in essence visual evidence of Gould listening to Gould already edited by Gould. The question is: who is going to be able to untangle the meaning left by the jumble of lines? “With this kind of manuscript, you’re looking for “cultural-historical importance and development of a musician,” Darren Sutherland, Bonhams manuscript specialist told me before the auction.

Another question: Exactly which manuscript was sold by Bonhams? During the editing of the film, French director Bruno Monsaingeon remembers at least two scores being constantly in use — his and Gould’s — but that the pianist may have used yet still another for further reference. “He was mainly interested in the sound,” Monsaingeon tells me from Paris. “I remember his score being next to him all the time for our editing which took about three weeks. But prior to that each of us had worked on the editing scheme separately. He made have had another score. Through it all he was making so many notes, everything was over-lapping at the time.”

Negotiations for the Bonhams sale started eight months ago. Expectations along the way grew bullish enough to suggest that the manuscript —  with Gould’s scattered notations in black flair pen and with orange markings — might earn up to $200,000 (Canadian) at auction. (Last June Bonhams set its own record price selling two pages of Beethoven’s “Emperor” Piano Concerto No. 5 Op.73 in the composer’s hand for $250,000 (US).

The Gould Estate, downplaying the auction’s importance, insists that it’s “not that a big deal for us as much as it is for people who simply love Glenn Gould,” says estate consultant, Faye Perkins. “Here’s something that was privately held, with his own markings.”

At least five other copies of a Gould-owned Goldberg Variations manuscript are known to exist including one at the Morgan Library in New York and another at Library and Archives Canada (LAC) with the rest of its great cache of Gould material. Bonhams was surprised when told of the possible existence of yet another copy; the one alluded to by Monsaingeon who has his own copy. (LAC has three copies of the score for the 1955 recording)

In any event, the sale and its pre-sale publicity keep the Gould brand alive, affirming the market potential for other projects already in progress. They include a projected romantic film biography about the pianist and his “secret” affair with American artist Cornelia Foss and for a touring Gould holographic stage show. The Gould Estate’s new deal with Primary Wave Music for everything Gould is expected to bring a modern pop hustle to the iconic brand name.

Indeed, the many unknowns that come with the score serve to increase Gould’s emerging “growing outsider status, something like a James Dean or even a Jim Morrison,” says Tim Page, a Gould friend and journalist who edited The Glenn Gould Reader. Page compared Gould’s two Goldberg Variations earlier this week in a lecture at Bonhams.

Major music manuscripts don’t fetch eye-popping sums earned by Post-Impressionist paintings, the thoroughbreds of the art auction market. For example, auction house records were set in 1987 on both the art and music front. But the $4.34 million (US) Sotheby’s hammered down for a 508-page manuscript of nine Mozart symphonies written in the composer’s hand — a record figure at the time for any manuscript sold at auction — still dwarfs in comparison to the record-breaking $39.85 million (US) Christie’s in London brought in for Vincent Van Gogh’s Sunflowers.

The gap in price point is less relevant than it seems. Limitless funds and ego — institutional, corporate and/or CEO — drive art prices. Any possible understanding of the true value of any visual art masterpiece left the auditorium decades ago. “We cannot even begin to imagine what would be paid for Velazquez’s Las Meninas if it came on the market,” one London dealer told me. “It would be the first billion-dollar painting.”

On the other hand, almost all of Gould’s notations have scholarly value and intellectual cache. “You are trying to make an educated assessment of value depending on past records and what it means to a wider cultural context,” says Bonhams Sutherland, who once ran The Strand’s Rare Book Department.

The Bonhams’ sale generated a whirl of questions throughout Gouldworld. It wasn’t who was buying that mattered, as much who was selling? Is it being put on sale by Ray Roberts, known to have a cache of Gould material in his basement which needs a home.

Not him, says Roberts. “Things like this” — the auction — “are an emotional strain for people like myself but it had to happen,” he says. “Yes, I worked for him, but he was a friend. This has never been an enrichment scheme for me. We need to get his things out of my basement. We need people looking after (Gould’s) things.”

“I don’t want them ending up in somebody’s dumpster.”

Peter Goddard is the author of The Great Gould.

Latest posts by Peter Goddard (see all)
Share this article