With the COC spring season in full force, several guest artists currently in town to sing in the two productions are participating in the free noon hour concert series. I particularly enjoy these as they give us a glimpse of a more intimate side of a singer’s artistry. Instead of projecting to the upper reaches of the 2071-seat Elliot Fraser Hall, the approximately 120 seat capacity of the Richard Bradshaw Amphitheatre (plus the standees and the few seats on the upper-level staring at the back of the performers) is tiny for operatic voices.  As a member of the media, I count myself lucky to be always in the third row, where I can catch every nuance of the face and the voice.

To my eyes and ears, the RBA recital given by French mezzo Clémentine Margaine was arguably the best of a very strong 2015–16 vocal series up to this point.  There’s a proviso, however — I went to most but not all of the vocal performances so I’m only speaking of my experience. Margaine has a powerful and gleaming low mezzo, with no discernable register break between chest and head voices. Her way with the text, whether French or Spanish, is exceptional, with clear diction at all times. Introducing the songs, Margaine spoke charmingly to the audience in slightly accented English. She explained that all the songs were about love in all its guises.

She began with the familiar Siete Canciones populares Espanolas by de Falla, almost a go-to cycle for women singers. These are short songs, the whole cycle lasting maybe not even ten minutes, requiring quicksilver changes of mood. The spectrum of emotions from love to hate is vividly expressed in the text and reflected in the melodic lines. Margaine’s low mezzo has just the opulence and earthiness for these songs. She was well supported by the exemplary playing of Stephen Hargreaves. The gleam in her tone is really striking, and she looks so beautiful as well — stage presence to burn, as they say. What’s not to love?

From de Falla, she ventured into even more dramatic territory, with three songs from the cycle Tonadillas al estilo antiguo by Granados. In “La maja dolorosa” the cry of anguish from a woman who has lost her lover was delivered memorably by Margaine.  Vocally this is a demanding song, beginning very high and dipping to the lowest reaches. Margaine had absolutely no problem with the technical demands. I kept thinking perhaps these songs would have been better with guitar accompaniment.

Next came the marvelous “Adieux de l’hôtesse arabe” by Bizet, another chestnut which I’ve heard many times in recitals, I recall a very memorable one given by English soprano Felicity Lott. She didn’t have nearly the opulence of Margaine and she sang it very lightly, almost in mezza voce and her interpretation was perhaps a bit more restrained, well, English.  Margaine, with her bigger voice and stronger chest register, sang it much more operatically. It’s really a matter of taste. I like hers very much, even though I’m not used to such an opulent voice in this song. Ravel’s “Oh! La pitoyable aventure” from L’heure espagnole was even more theatrically delivered. For me, her recital is really typical of many opera singers — it’s more of an operatic event than a recital of chansons — you can say it’s definitely a Burgundy, not a Riesling. Chacun à son goût…

After the Ravel, she immediately launched into “Habanera.” But not just another Habanera — she started going up the stairs, teasing the audience, all the way up to the top and then came back down at the end of the aria. I was too timid to turn around to look, but judging by the laughter especially from the men in the audience, they were totally captivated. Close up, her voice sounds huge, my ear drums vibrating like crazy.  This was the first time I saw a recitalist going up the stairs to interact with the audience during an aria — with her high heels, it took guts. I gave her full marks.

Kurt Weill’s “Youkali” was delivered in her sultry, world-weary manner, and very beautifully. The lilting tango beautifully underscored by Hargreaves, whose playing was nothing short of brilliant, with razor-sharp rhythmic precision. The only little quibble I have is that she avoided the high option, but given the sumptuousness of her voice, I didn’t miss it. It was the richest singing of this song I’ve heard. The recital ended rousingly with “El vito” by Obradors, which brought the audience to its feet.  As I’ve written in my review of her Carmen, I hope the COC will bring her back as soon as possible. She would make a great Delilah, don’t you think? 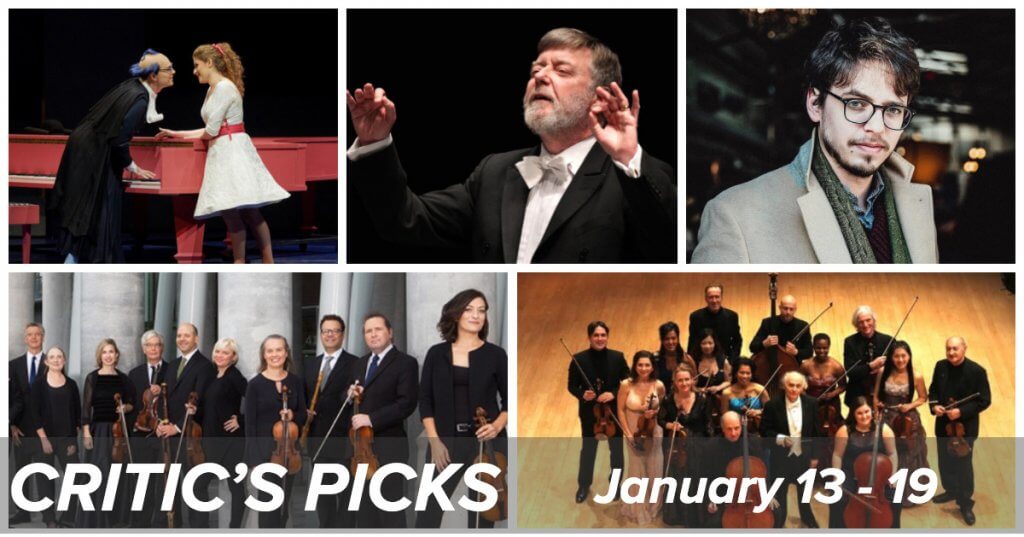 Classical music and opera events happening in and around Toronto for the week of January 13 to 19.
(Continue reading)
Read the full story Comments
Share this article