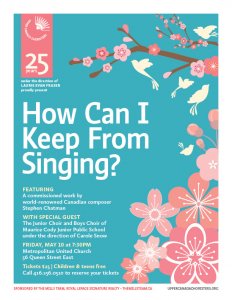 The Upper Canada Choristers and conductor Laurie Evan Fraser hope you can join us to celebrate 25 years of community service at a concert titled How Can I keep From Singing, Friday, May 10, 7:30 p.m. at Metropolitan United Church, 56 Queen St E (just east of Yonge Street beside St Mike’s hospital). Tickets are $25, children and teens free when […]

Art of Time Ensemble | Bests of Words and Music

Highlights from 20 years of Art of Time Ensemble’s theatre, poetry, and song. Toronto’s innovative and eclectic Art of Time Ensemble celebrates their 20th anniversary season with a program of theatre, poetry, and music. The concert highlights range from poetry (Margaret Atwood’s, specifically, set to original music), to scenes from Shakespeare (Much Ado About Nothing, […] 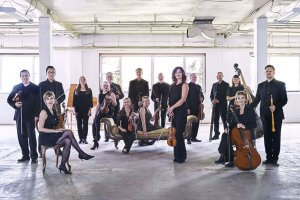 Directed by Ivars Taurins Tafelmusik Chamber Choir Jana Miller, soprano Meg Bragle, mezzo-soprano Colin Ainsworth, tenor Magnificent music to end the season, from the perfection of Bach to the splendour of Zelenka. The final concert in our anniversary season begins with the burst of exuberance and invention that is Bach’s Magnificat, a timeless musical description of devotion […] 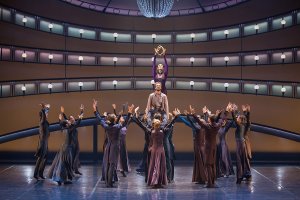 An Exquisite Spectacle of Musical Genius & Tormented Soul The immortal music and agonized life of Pyotr Ilyich Tchaikovsky are cast in a bold new light through the eyes of Russian choreographer Boris Eifman. Returning for their fourth anticipated Toronto engagement, the dramatic intensity and exquisite artistry of Eifman Ballet invites viewers into the brilliant […]