SCRUTINY | The 21C Festival Opens With The Hard Stuff. Handle With Care 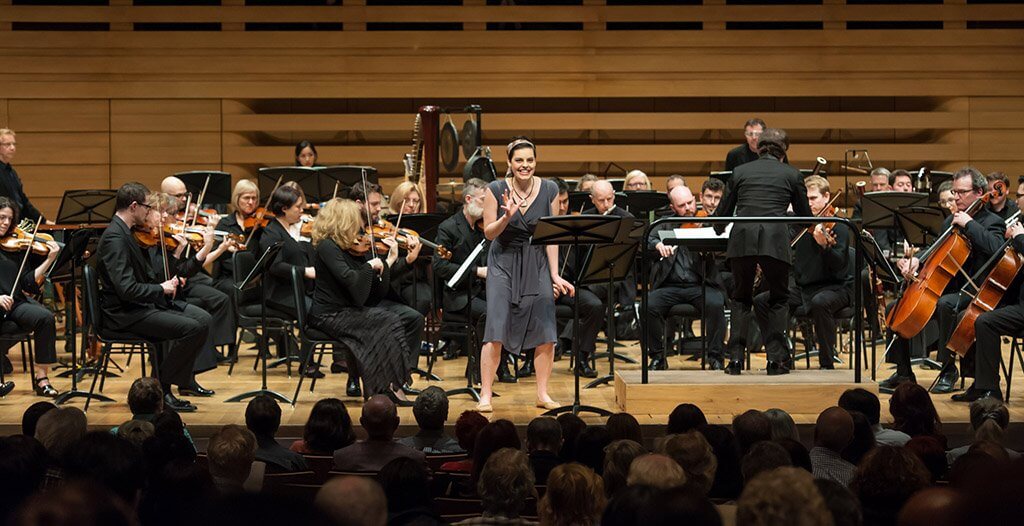 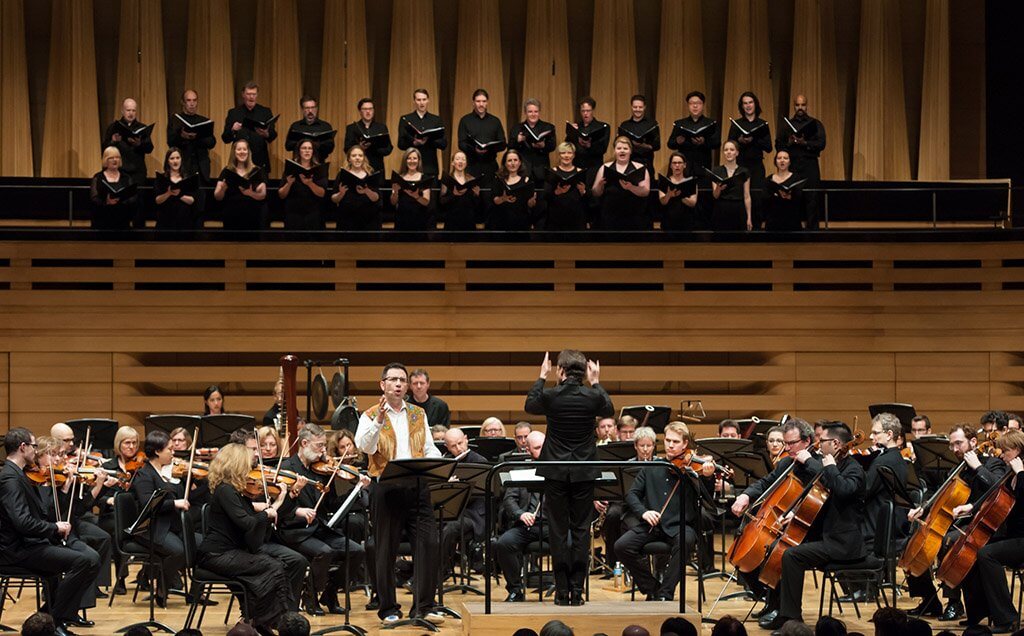 Night one of the RCM’s 21C Festival featured a performance by the Canadian Opera Company Orchestra, under the baton of Johannes Debus. It was a refreshing experience to see the group take center stage at Koerner Hall, away from their typical vantage in the orchestra pit at the Four Seasons Centre. That said, the orchestra stayed noticeably within their wheelhouse, performing only one piece for solo orchestra.

Considering the yearlong 150th celebration, ideas of diversity, inclusivity, and particularly reconciling the nation’s dark past with First Nations were the issues of the day. Opening with an acknowledgment of the land in which Toronto sits, followed by a Tłįchǫ Prayer (sung by Tłįchǫ drummers and elder) it served as a welcome segue into a new work that featured the Tłįchǫ language (translated by Rosa Mantla who also performed as the diction coach to the Elmer Iseler Singers).

This first piece, Naka (Northern Lights) was one of two pieces by Toronto-based composer Brian Current. The opening prayer was a particularly good introduction, as it imitated elements of the drumming heard in that opening prayer and chant.

It is sometimes difficult to determine where the line between “acknowledgment” and “appropriation” lies, but with Tłįchǫ people in the audience and a scholar as part of the creative process, there was, at least, an effort made toward the prior. As a commission and world premier, it featured librettist Richard Van Camp as the narrator who spoke in English to a choir that responded in Tłįchǫ — an impressive feat assuming their unfamiliarity with the language.

Naka, as well as the final piece on the program by Current’s The Seven Heavenly Halls (featuring tenor Andrew Haji), played to his strengths. In a vocal context, Current’s frequent and developing ostinati worked incredibly well. They created a bedrock with which melodies could sit, allowing the orchestral voices to perform coy text painted against orchestrational effects. While some were perhaps a bit on the nose (such as zipper sound effects corresponding to the text “use your zipper”), it was well-informed and displayed a strong understanding of the choral—orchestral medium. A particularly striking moment was in The Seven Heavenly Halls, where the word “Torah,” was set to sound like it was emulating Judaic tropes or cantillations.

Matthew Aucoin’s The Orphic Moment, a bravura piece featuring mezzo-soprano Emily D’Angelo, utilized only a chamber subset. It was (ironically) the most operatic, but fitting considering the text was about the climax of the Orpheus myth in which Eurydice pleads with Orpheus to turn and look at her upon trying to exit Hades. An interesting twist on the interpretation was the use of the violin to emulate the voice of Eurydice as opposed to the female voice. Aucoin used it in often surprising ways: first as a paired down and accompanied by unpitched percussion, and then as a vocalise accompanied by the violin.

Samy Mussa’s Kammerkonzert stood out as the most stretching for the operatic orchestra. The piece was mostly non-tonal, and featured an emphasis on timbre and orchestration. The blockiness of texture worked in the orchestra’s favour,  and showed that the COC Orchestra are more than capable of keeping up with other contemporary orchestral ensembles. Surprisingly (and partly because it was divergent from the rest of the concert) this was my personal favourite from the evening.

Unsuk Chin’s music was then another counterpoint to the larger, more dramatic pieces on the program. Snags&snarls, a setting of Lewis Carroll poems, was appropriately childlike. The song Speak Roughly to Your Little Boy featured a rhythmical smashing of glasses in garbage cans (percussionist wearing protective eyewear and all). Emily D’Angelo deserved praise for singing “Twinkle, riddle, fiddle-faddle, dibble-double, shrinkle, sprinkle, tickle-tackle” without getting tongue-tied. The off-kilter styling worked fantastically for the subject matter. Even when at its most simple moments, there was a keen sense of wit, a currency in short supply with new music.

All told, it was a strident opening night for the 21C Festival and a hint at four days of new music worth celebrating.