Globally, the streaming market belongs to the big three. Spotify takes up 36 percent of the music streaming market, with Apple Music at 19 percent, and Amazon at 12 percent. It’s true that Apple Music, Spotify, and other streaming services include thousands of classical music tracks in their catalogues. The problem becomes, how do you find what you want? Spotify playlists like The Greatest Classics and Classical Essentials cater to novices and those browsing the entire category of classical music.

“Spotify is okay if you already know the exact album you want,” says Toronto composer/musician Frank Horvat. “I use it in a very impersonal way.”

Spotify offers three general search criteria: artist, song, and album. With Apple Music and Spotify, most of the metadata used in searches comes in the “song title” field. As any classical music lover knows, one orchestra’s interpretation of the same symphony can be quite different than another’s. Ditto the conductor, and even the concert hall. Certainly, the Berliner Phil of 2019 is vastly different than the Berliner Phil of 1969. There are movements within symphonies, concertos, and other larger orchestral and chamber works.

The problem begins even more fundamentally with categorization. While there are multiple genres of popular music, about 1,500 years worth of classical Western music from Gregorian chants to Philip Glass is crammed into one slot.

While it’s estimated that North America’s share of the music streaming market amounts to about 40 percent of the global market, it’s not clear how much of that belongs to classical music. Figures from Nielsen suggest that classical music accounts for a mere 1 percent of all music consumption in the United States. That gives the big players little incentive to cater to the needs of classical music lovers in particular.

Idagio is one of the new classical music apps. The Berlin-based company was founded in 2015, but just launched in the United States and Canada in the fall of 2018 after raising more than €10 million for the move. Co-founder Till Janczukowicz was a professional pianist and music journalist who got into the management side of the music business in 1990. He served as Director of master classes of the Schleswig Holstein Music Festival, and worked at Columbia Artists Management from 1996 until 2011, including heading the European office in Berlin. He’s represented high profile clients in the classical music world, including conductors such as Seiji Ozawa and André Previn, and has produced many classical music concerts across Europe.

“There is only one Beethoven’s Symphony No.7, one Mozart’s Magic Flute and one Tchaikovsky’s Symphony No.11, but you have hundreds of thousands of recordings and performances of those same pieces that are competing for the attention of consumers. This genre of classical cover versions, if you like, requires a different data model than Spotify.”

Idagio developers built their own search model. It allows subscribers to discover new music and new recordings by browsing through composers, ensembles, soloists, conductors, instruments, genres, and/or periods. Idagio offers a “Discover” button that points the way to new releases and curated playlists, while “Moods” will help choose music by emotional content — Melancholic, Gentle, Passionate, and so on.

Idagio has an enviable catalog of more than 1 million tracks to choose from, including licensing agreements with Deutsche Grammophon, Sony, Decca, Warner Classics / Erato, harmonia mundi, and ECM. The company has agreements with more than 1,000 independent labels along with the big names, providing a steady stream of new material. Idagio also offers video series, including the popular “Behind the Music” series where performers talk about their favourite recordings.

The new algorithms and models are the result of years of work on the part of both music and data specialists. The music database is organized by work, and not by track, which allows users to browse through and compare different recordings of the same pieces. There are, for example, more than 200 versions of Beethoven’s Seventh Symphony available for perusal.

Composer Horvat points to a potential fly in the ointment. “Being a composer of modern classical music — how to you define ‘classical music’?” What happens to the huge crossover genre, in other words? If works don’t fall neatly into the classical music genre, where will it land? “It’s one of my frustrations,” he says. “How is my music classified? Can people find it?” Since both services are still in their infancy, it remains to be seen how the criteria and definition for classical music itself may evolve.

Idagio is available for most major phones and computer apps, including web browsers as well as mobile apps. With mobile apps, it’s also possible to listen to your saved collection without WiFi. There is a unique partnership with Sonos speakers that lets subscribers stream directly from Idagio to Sonos devices. 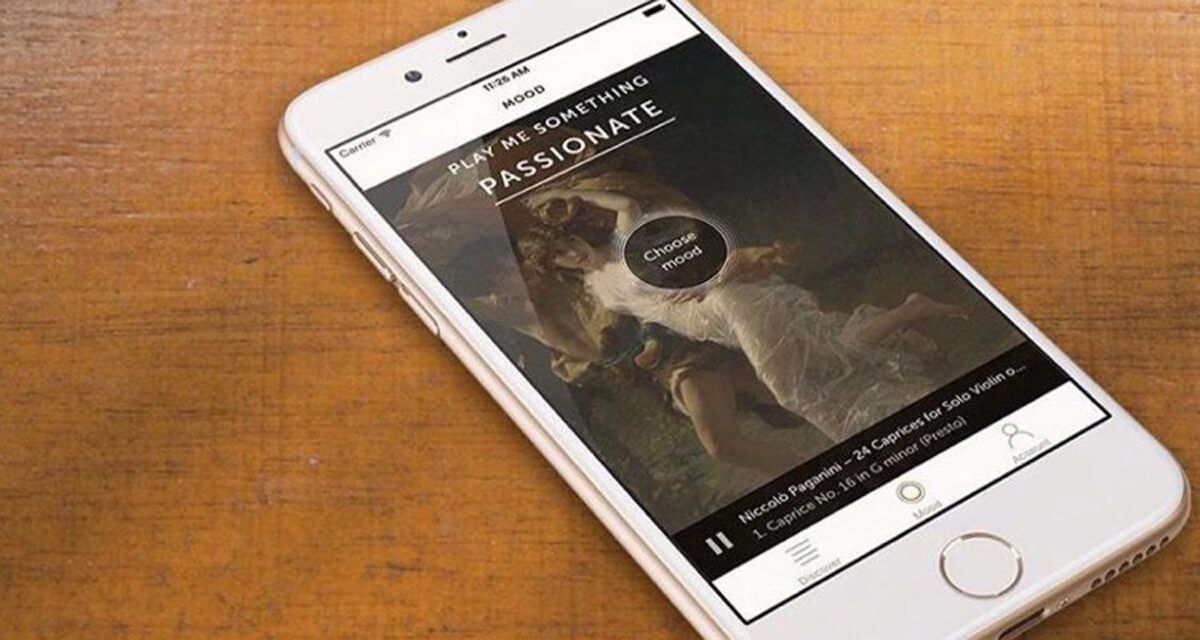 With dedicated services like Idagio, playlists are curated by leaders and well-known figures in the field, including up to date releases, and an attention to sound quality. Most downloads on Idagio are available in lossless audio, a compression algorithm that preserves the original sound, in contrast with more popular lossy formats such as MP3 or WAV, which discard some data as it compresses the sound. To date, Idagio has signed up more than 1 million users. On the Canadian Android app store, Idagio gets 4 stars, with more than 1,000 reviews, and more than 100,000 downloads.

Janczukowicz is confident that Idagio can carve out its place in the streaming landscape. In the Deutsche Welle interview, he points out that estimates call for a music streaming market of nearly 1 billion people by 2030, or about triple today’s figure. He describes the market for reporters.

“Classical music sales account for about 5% of the global recorded music market. Also, roughly 30% of music lovers are fans of classical music, so that gives us a vast market. We’re also appealing to new generations of lovers of classical music. Unlike the average age of 60 for a classical concert in Germany, our listeners are much younger, averaging between 35 and 55.”

Primephonic is a competitor with Idagio for the classical music niche, based in Amsterdam and New York City.  Thomas Steffens, co-founder and CEO of Primephonic, is equally optimistic, as he told Forbes reporters.

“There is space in the market for niche streaming services. Classical music is fundamentally different, and it doesn’t work very well with Spotify’s algorithms and technology.”

Primephonic also offers over 1 million tracks from 400 labels, including agreements with Warner Classics (Erato, Virgin, Warner), Sony Classical (and Sony Masterworks), and Universal Music Group (including Decca, Deutsche Grammophon, Verve, and Mercury), and is available in the US, the UK, and the Netherlands so far. Primephonic has been downloaded more than 150,000 times since its debut in September 2018.

Primephonic is looking to differentiate itself from Idagio by offering selections and recommendations that go beyond the typical. “We focus on the needs of our subscribers by recommending less famous works, and less famous artists,” Steffens told Forbes reporters.

Primephonic is also slightly cheaper, with a subscription price of $7.99 per month to Idagio’s $9.99.

Is there room for them both? Time will tell, but the one thing both companies share is a love of the genre and respect for its listeners. “Of course [Idagio] is our competitor, but they are also our partners in crime,” Steffens told reporters.

While the traditional lament of the classical music biz has been the aging of its audience, it looks like music technology may just be the ticket to rejuvenating that fan base. After the music of J.S. Bach was played at the wedding of Princess Eugenie in October 2018, for example, there was a surge in sales for the music of the Baroque master. Driven by millennials, it’s more than a passing fad, as it turns out.

Streaming provider Deezer released the results of a survey in March 2019 that found a 270 percent increase in the number of subscribers to its most popular classical playlist. About 43 percent of the new listeners were identified as millennials. It ties in with research done by the BBC and other industry stakeholders.

Most observers credit that rise to music technology itself, and the way it has made the world’s vast libraries of music accessible. Add to that a raft of new young star performers on the classical music circuit, and it would seem that the time is right.

Now that its North American launch is in place, Idagio has set its sights on Asia.  With users currently in 180 countries, and services available in English, German, French and Spanish, there are plans to add an Asian language before the end of 2019.

Industry observers expect that niche streaming services like Idagio and Primephonic will begin to take up more and more space within the media landscape. A one-size-fits-all music streaming service doesn’t do many genres outside the pop/rock/dance/country paradigm justice. In the case of classical music, in particular, there are two major growth areas that both streaming services are trying to capture: the younger demographic, and the huge and growing Asian market. Both segments are active technology users, with streaming an already important part of the entertainment landscape.

Aside from the user experience, streaming offers a new world for classical music composers and performers as well. Horvat notes the many ways the music industry has changed, including the fact that recordings themselves are no longer a reliable way for musicians and composers to make a living. “Albums are kind of a promotional thing these days,” he says. “The question is, can you still make money with recorded music?”

The advantage of big and generic services is clear: a free option. Like anyone else, Horvat enjoys being able to listen to Spotify for free, but even on a budget, admits to mixed feelings. “I have a real inner battle. I just love the convenience, but I realize that the model is not sustainable.”

Idagio aims to create a new paradigm for performers and composers as well as classical music lovers. Spotify and other major streaming services pay per play, provided the user listens for 45 seconds or longer. On major services, the payouts are fairly dismal. Apple Music pays $0.00735/play, with Spotify at $0.00437/play, and Youtube at $0.00069/play. To put that into perspective, at Spotify’s rate, an artist would have to receive 336,842 total plays to earn a whopping $1,472USD.

Idagio’s scheme pays out per second, per user, allocating streaming revenue directly from subscriber rates. If a user spends 25 percent of their time listening to the TSO, the orchestra will receive 25 percent of that user’s subscription fees per month.

Technology is fueling a trend that sounds like the bright spark the classical music world has been waiting for, but with both companies newly launched, the viability of specialized streaming for classical music lovers remains to be proven.