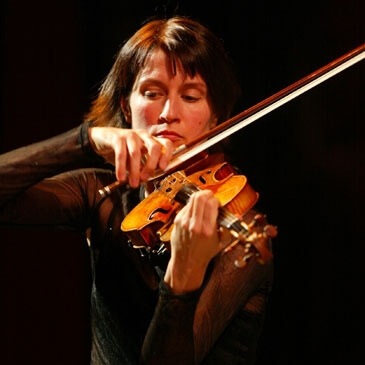 This is the 663rd concert in Koerner Hall

“From his youth up to fairly old age he played the violin purely and with a penetrating tone and thus kept the orchestra in top form, much better than he could have from the harpsichord,” C.P.E. Bach said of his father. “He completely understood the possibilities of all stringed instruments.” Three violin concertos by Bach have come down to us, all of them making regular appearances in the concert hall. They include today’s A Minor and E Major Solo Concertos, together with the Double Concerto in D Minor. These, however, only represent the tip of the iceberg. Bach almost certainly wrote others, now lost, while working early on in his career in courts at Weimar and Cöthen. It is also more than likely that several of his harpsichord concertos were first written in versions for violin and orchestra. Others are believed to have been reworked into movements in the cantatas.

Bach reworked much of his instrumental music when working in Leipzig. Here, his need for instrumental music was constant once he commenced his tenure in 1729 as director of the Collegium Musicum concerts. For this widely-known society of university students, gifted amateurs, and a few professionals, Bach could draw on his own catalogue and quickly come up with a fresh work for their Friday evening gatherings. These took place indoors in Gottfried Zimmermann’s coffee house in the winter months, outdoors in the café garden when it was warmer. It was for these convivial meetings that the harpsichord versions of the lost violin concertos were made. And recent research has now successfully argued that both the A Minor and the E Major Violin Concertos were also both written for the coffee house concerts at the ‘Bachische’ Collegium Musicum.

Bach first came across the Italian concertos of his contemporaries – composers like Vivaldi, Albinoni, and Marcello – while working at the Weimar court, 1708-17. From these Venetian composers he took the three-movement, fast-slow-fast, concerto form with its dramatic style and, with it, the alternating structure of solo and orchestral episodes that we find in the outer movements of the two original violin concertos. To the basic pattern, Bach added a wealth of contrapuntal and accompanying interest, often blurring the clear distinction between solo and tutti parts found in the Italian concertos of the time. While taking inspiration from Italian string writing, Bach fully assimilates its musical language with his own and the resulting musical texture is richer and more complex.

In the opening movement of the Violin Concerto in A Minor, BWV 1041 Bach gives his soloist substantial development of musical ideas first presented by the orchestra in the opening ritornello. He combines thematic development with rhythmic energy in a movement of great concision. In the slow movement, the longest of the three, Bach designs a solo melody of great lyrical beauty. But note how its sweetness is underpinned and enhanced by dissonance in the often chromatic solo cantilena and by tension in the orchestra’s harmonic support. The finale is a gigue-like dance of great exuberance whose momentum increases as the virtuoso display from its soloist increases.

Both the A Minor and E Major Violin Concertos became concertos for solo harpsichord, strings, and continuo (BWV 1058 and 1054) during Bach’s time in Leipzig. The violin versions came first. The rising major triad and its associated ideas at the opening of the Violin Concerto in E Major, BWV 1042 provide the building blocks for the first movement. The three rising chords followed by a pause are the stock-in-trade of many an Italian string concerto (someone calculated that two dozen of Vivaldi’s concertos open in such a manner). But in Bach, orchestra and soloist immediately enter into a contrapuntal dialogue with the material. Its Italianate ideas continue to both provide an accompaniment to the soloist’s elaborate figuration and to bring structural unity with every appearance. As in the A Minor Concerto, the slow movement is in the relative minor. Expressive and meditative, the solo violin now weaves a rhapsodic line over a gentle, recurring bass pattern, sometimes heard, sometimes implied. The finale returns to the ritornello pattern of the opening in a movement of considerable symmetry. Each of the five joyful orchestral refrains is precisely 16 measures in length. They are punctuated by violin episodes of the same length and increasing intensity and brilliance. The final one, however, roams far from the home key and is allowed to double in length before bringing us back to a resounding E major.

BWV 1060 is best known in a transcription by Bach from around 1736 as the Concerto for two harpsichords and strings. But this, in turn, is believed to have started life as an earlier lost concerto by Bach for oboe and violin. Several musicians have attempted to recreate Bach’s original. Ottavio Dantone, however, had another intriguing idea – that of keeping the keyboard origins of the Bach transcription and combining it with the melodic line of the original. The concerto you will hear today, the Concerto in C Minor, for violin, harpsichord, and orchestra, BWV 1060, is the result. “Viktoria and I, having often performed [and recorded] the Sonatas for violin and harpsichord, were keen to find a piece we could play with orchestra,” writes Dantone. “This unprecedented version works very well, enriching the composition with a range of new nuances.” The reconstructed concerto again follows the pattern of the three-movement Italian concerto. Its opening movement presents the main theme in a myriad of variations before returning to its original form towards the end. The slow movement is a duet containing some of Bach’s most poetic, melodically sustained music, heard over gently pulsing chords. The finale presents an elegantly worked-out dialogue on a dancing, Bourée-like theme.

BWV 1053 (which we are hearing today as the Violin Concerto in D, BWV 1053) has again come down to us in one of Bach’s transcriptions, this time as a solo harpsichord concerto with strings and continuo. But its movements have also survived in an alternate version in the cantatas. The first movement comes directly from the opening instrumental Sinfonia to the cantata Gott soll allein mein Herze haben (God alone shall have my heart), BWV 169. The second movement is an aria from the same cantata, while the third forms the opening Sinfonia to the cantata Ich geh und suche mit Verlangen (I go and seek thee with longing), BWV 49. Scholars believe that a lost concerto for a melody instrument (oboe, possibly violin) preceded both of these versions and this is what fired the imagination of tonight’s performers. Ottavio Dantone writes: “Bach’s music lends itself particularly well to such adaptation: his works are so structurally and conceptually perfect that they transcend sound and timbre. Many can be played on any instrument without altering their intrinsic value … I immediately thought of transcribing it in D major, not only because the brighter key suits the violin, but also because its astounding central Siciliano features a glorious melody that suits the violin perfectly.”                                               – Program notes © 2016 Keith Horner

Viktoria Mullova studied at the Central Music School of Moscow and the Moscow Conservatoire. Her talent captured international attention after winning first prize at the 1980 Sibelius Competition in Helsinki and the Gold Medal at the Tchaikovsky Competition in 1982 which was followed, in 1983, by her dramatic and much publicized defection to the West. She has since appeared with most of the world’s greatest orchestras and conductors, and at major international festivals.

Known now as a violinist of exceptional versatility and musical integrity, her curiosity spans the breadth of musical development from Baroque and Classical right up to the most contemporary influences from the world of fusion and experimental music. Her interest in the authentic approach has led to collaborations with period instrument ensembles such as the Orchestra of the Age of Enlightenment, Il Giardino Armonico, Venice Baroque, and Orchestre Révolutionaire et Romantique. She has a great affinity for Bach and his works make up a large part of her recording catalogue, and her most recent disc of Bach Concerti with the Accademia Bizantina and Ottavio Dantone has been highly praised.

Accademia Bizantina was founded in Ravenna in 1983 with the intention of “making music like a large quartet.” A number of prominent personalities supported the orchestra’s development and growth, among them Jörg Demus, Carlo Chiarappa, Riccardo Muti, and Luciano Berio. Over the years, the group has also enjoyed the collaboration of many musicians such as Stefano Montanari, who was an integral part of the orchestra for over 20 years. This has allowed the ensemble, which plays on period instruments, to become ever more specialised in 17th, 18th, and 19th-century repertoire, gradually developing a distinguished voice by adopting its own interpretative style based on a common language and shared performance practice.

In 1989, Ottavio Dantone joined the group as harpsichordist and, in 1996, he was appointed Music and Artistic Director. Under his expert guidance, Accademia Bizantina has merged philological research and an aesthetic approach to the interpretation of music from the Baroque period, and became one of the most prestigious ensembles on the international musical scene today.

After performing their first staged opera, Giuseppe Sarti’s Giulio Sabino, the orchestra has gone on to specialise in the rediscovery and performance of Baroque operas, ranging from major works to operas which have never been performed in modern times. Among the orchestra’s productions scheduled for 2016 are Antonio Vivaldi’s L’incoronazione di Dario, Händel’s Alcina and Belshazzar, and J.S. Bach’s The Art of Fugue.

While still quite young, Ottavio Dantone received a performance degree in both organ and harpsichord, and immediately launched his concert career. Quickly attracting the attention of the critics as one of the finest players of his generation, he was awarded the basso continuo prize at the International Competition in Paris and he was the highest prize winner at the 1986 International Competition in Bruges.

His collaboration with Accademia Bizantina began in 1989 and his profound understanding of historical performance practices in the Baroque period lead, in 1996, to his nomination as Music Director of that group. Under his direction, Accademia Bizantina became one of the most outstanding Baroque orchestras on the international scene today.

Over the last 20 years, Mr. Dantone has gradually added to his activities as soloist and director of chamber music and small orchestras that of a major conductor, extending his repertoire to the Classic and Romantic periods. As an opera conductor, he made his debut in 1999 in Giovani Sarti’s Giulio Sabino at Ravenna’s Alighieri Theatre with Accademia Bizantina. From then on, he has conducted both well-known operas as well as rediscoveries of operas rarely heard, at such celebrated festivals and theatres as La Scala in Milan, Glyndebourne Festival Opera, the Royal Theatres in both Madrid and Paris, Zurich Opera, and the London Proms.

He has recorded as both soloist and as a conductor with such noted record companies as Decca, Deutsche

All artists are making their Royal Conservatory debuts tonight.