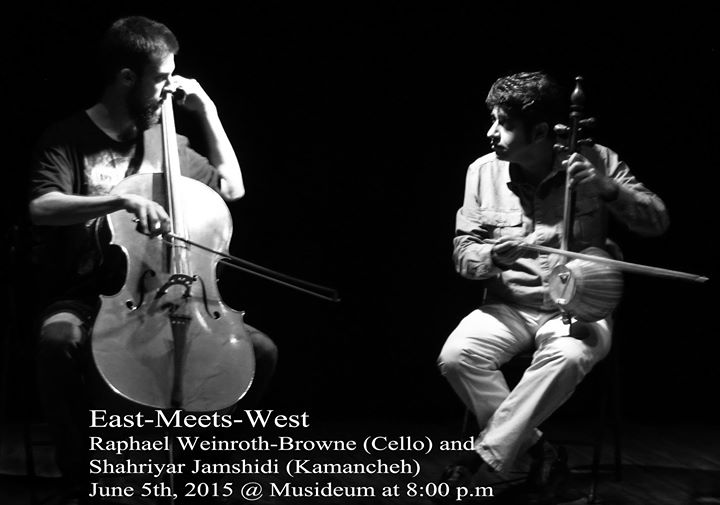 East-meets-west duo comprised of Shahriyar Jamshidi (kamanche) and Raphael Weinroth-Browne (cello) blurs musical genre conventions with their highly evocative improvised performances. The scope of their creations ranges from soulful and emotive to incendiary and intense, and their sound has been described as being “totally entrancing.” With each performance, Jamshidi and Weinroth-Browne weave an intricate musical tapestry, one that is both memorable and totally unique.

Raphael Weinroth-Browne
———————————–
Cellist, multi-instrumentalist, and composer, Raphael Weinroth-Browne is rapidly making a name for himself as an exceptionally versatile musician both in Canada and internationally. He has performed twice at Nouvelle Prague, an esteemed showcase festival in the Czech Republic, as well as Wave-Gotik Treffen, the largest international gothic music festival in the world. He was recently featured as a performer at the 2014 International Cello Festival of Canada.

Since 2009, Raphael has composed and performed music on over 30 full-length albums (including the Juno Award-winning Woods 5: Grey Skies and Electric Light) and has appeared in professional music videos with acclaimed artists such as two-time Juno Award-winner Gowan. His latest project, The Visit (www.thevisitmusic.com) has received virtually unanimous praise for its genre-defying fusion of dark chamber music, progressive metal, and Middle-Eastern music.

Shahriyar Jamshidi
————————–
Born in Kermanshah, Iran, Shahriyar Jamshidi holds a Bachelor of Music from the Tehran University of Art. He received his kamanche training with celebrated musicians such as Mojtaba Mirzadeh and Ardeshir Kamkar, focusing on the study of Kurdish music in order to reconstruct the old songs of the Kurds, his people. In 2003, Shahriyar founded the Dilan Ensemble (derived from the name of the Kurdish musician Ghader Dilan), which has since performed numerous times in Tehran. Shahriyar has also performed on several well-known Kurdish TV channels including KTV, Norooz, and Kurdsat. As a composer, he has devoted his career to preserving the ancient music history of Kurdistan. Now based in Toronto, Shahriyar hopes to introduce Kurdish music and the kamanche to a wider audience, having already performed at Iranian Heritage Day at the Royal Ontario Museum in May 2013 and Toronto’s Tirgan Festival in July 2013. He has released three albums: Alvanati (2004), Call of the Mountain (2008), and A Yellow Flower (2014).