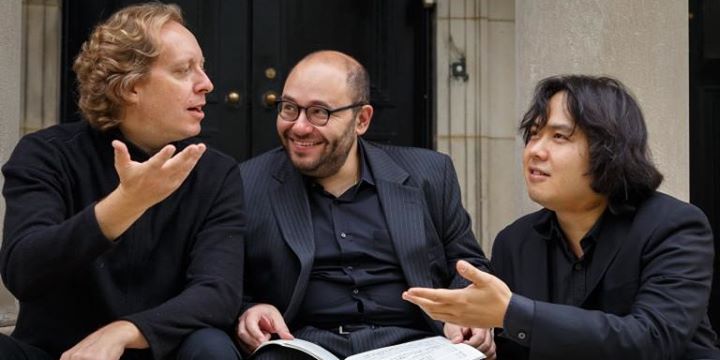 As a chamber musician Mr. Kawasaki is a founding member of the D’Amici String Quartet along with Federico Agostini, Sadao Harada, and James Creitz as well as Trio+ with Vadim Serebryany and Wolfram Koessel. The two ensembles have toured extensively within North and South America, Europe and Japan.

He is also a founding member of Arkas String Quartet, a resident ensemble in Sasebo, Japan.
His most recent recordings include chamber works by Beethoven, Mozart and Schumann on the
TDK Core Label and Denon Label. He has also recorded Bach’s Double Concerto and the Complete Brandenburg Concertos with Walter van Hauwe and the Saito Kinen Chamber Players, both on the King Label.

Wolfram Koessel, cello: Since his critically acclaimed Carnegie Hall debut, cellist Wolfram Koessel has embarked on a diverse career as a soloist, recitalist and chamber musician, performing internationally in the world’s most distinguished concert halls. STRAD magazine wrote of “the exceptionally attractive cello playing of Wolfram Koessel” who has established himself as a sought-after musician, performing concertos with the Jupiter Symphony, the New York Metamorphoses Orchestra (which he co-founded in 1994), Jerusalem
Symphony, the Osaka Symphony, the Mannes Orchestra and symphony orchestras in Stuttgart, Cordoba, Mendoza, Costa Rica, Iowa, and New York.
In 2006 Mr. Koessel joined the American String Quartet with whom he performs regularly at the Berlin Philharmonie, Amsterdam’s Concertgebouw, Köln Philharmonic Hall, Metropolitan Museum of Art, Kimmel Center, among others. He has performed with artists such as Rene Fleming, Richard Stolzman, Edgar Meyer, Menahem Pressler, Zakir Hussain, Ute Lemper, Sharon Kam, Jeremy Denk and many more.
He is on the cello and chamber music faculty at the Manhattan School of Music and also in residence at the Aspen Music Festival and the Great Wall Academy in China. He served as Music Director of the Mark Morris Dance Group from 2004-2008 and has toured extensively with the company, performing hundreds of concerts and world premieres with them worldwide.
Based in New York City, Mr. Koessel appears with a wide range of ensembles and chamber music groups such as Orpheus Chamber Orchestra and the New York Philharmonic. Upcoming performances in 2017 will lead Mr. Koessel to Israel, Japan, Germany, Spain, Canada, Mexico and across the United States.
He is a founding member of the group Trio+ together with violinist Yosuke Kawasaki and pianist Vadim Serebryany. This unique group expands the idea of a piano trio with creative programming and distinctive performance atmospheres.
Mr. Koessel resides with his wife, musician and writer J. Mae Barizo and his daughter in Manhattan.
Vadim Serebryany, piano: Vadim Serebryany has been acclaimed by audiences and critics on five continents for his sensitive and intelligent music making. An Honours graduate with Distinction from the Royal Conservatory of Music in Toronto, where he was a student of Marina Geringas, Vadim went on to complete his Bachelor¹s and Master¹s degrees at Juilliard, under the tutelages of the legendary Russian pianist Oxana Yablonskaya and the esteemed American pianist Jacob Lateiner.
The final leg of Mr. Serebryany¹s formal education took him to Yale University, where he completed his studies in the prestigious Doctor of Musical Arts program under the brilliant Russian pianist and teacher Boris Berman. He has performed in Europe, South America, Australia and throughout North America, and in 2008 completed his eighth consecutive recital tour of Japan.
In recent seasons Mr. Serebryany has embarked on many interesting and challenging projects, including performing the complete Beethoven sonatas for piano and violin, as well as presenting various solo and chamber works of the Second Viennese School composers in creative programs.
Mr. Serebryany has collaborated with such prominent artists as choreographer Mark Morris, Baritone Gary Reylea, cellists Suren Bagratuni and Eugene Osadchy, violinists Mayumi Seiler, Almita Vamos, and Yosuke Kawasaki, and members of the American String Quartet, the Enso Quartet, and the Glenn Gould String Quartet. In 2007 he and Mr. Kawasaki made their recital debut at Carnegie Hall.
In 2005, Vadim founded Trio+, with violinist Yosuke Kawasaki and cellist Wolfram Koessel. The ensemble is known for its creative programs which explore a large portion of the chamber repertory, including duos, trios and larger ensembles in which they frequently collaborate with guest artists. The trio has performed to critical acclaim throughout North America and Japan.
From 2005 to 2008 Mr. Serebryany served as Artist in Residence at La Sierra University in Riverside, California. Since September, 2008 Mr. Serebryany has been an Assistant Professor of Music at Huntingdon College in Montgomery, Alabama.